Zappa Pokes Into The Fine Arts 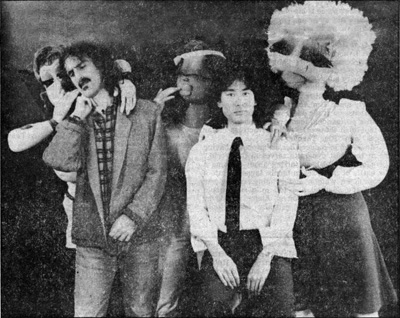 Frank Zappa, left, Kent Nagano with the gang from 'A Zappa Affair.'

With the aid of life-size puppets as dancers, and a huge 110-piece orchestra that spilled from the pit onto the sides of the stage, rock star and cultural satirist Frank Zappa's plunge into the world of the fine arts became a reality over the weekend.

The "arts" may never be the same again.

It was labeled "A Zappa Affair" and it was supposed to be a "big event" in the crossover world of rock meets classical music, four larger-than-life symphonic ballet works written by Zappa and performed by the Berkeley Symphony Orchestra.

At least that's now it was marketed. In reality, it wasn't Zappa's music but the spectacularly successful overall production that made Friday's world premiere at UC Berkeley's Zellerbach Auditorium a true event.

It was one of those rare times when a wild new concept was fully realized. Usually such cross-cultural projects look great on paper, but don't translate to the stage.

Zappa's concept, the orchestra, dancers and a dazzling array of sets and props, all coalesced into a huge, two-hour production that was funny, entertaining, mixed the various art forms masterfully, and took a bold step into the future.

Everything worked to cause laughter and sensory stimulation – the music, choreography by Tandy Beal and Joan Lazarus, Evan Parker's lighting, and especially the use of life-sized puppets designed by John Gilkerson's S.F. Miniature Theatre and manipulated by Beal's dancers, which on stage looked like an animated Claes Oldenburg soft sculpture nightmare.

The visual portion was so strong that it was impossible, much of the time, to listen to Zappa's music as music. The orchestra's role was as background or soundtrack to the goings-on, on stage. The overall performance was so brilliant that the few mistakes and missed cues were trivial.

The event also served as public announcement of one of the Bay Area's best-kept secrets in recent years, that the Berkeley Symphony, under the direction of conductor Kent Nagano, has become the most important performer of contemporary orchestral works, leaving the more conservative but better-funded and promoted Oakland and San Francisco symphonies in the artistic dust.

The production was repeated Saturday in Berkeley, and will be staged this Wednesday at 8:30 p.m. in the San Jose Center for the Performing Arts. The ticket prices are steep by Zappa standards ($18–$24 for San Jose), but a real bargain for the size of the production.

Zappa did not perform but served as host, wittily explaining the abnormal plots of each of his four works to the nearly full house, treating them as art, but poking some fun at them as well.

When the performers left out a sequence in "Sinister Footwear" (the evening's longest work at 30 minutes, about a man who designs and has illegal aliens manufacture purple-and-chartreuse tennis shoes that become a national fad featuring a dancing Michael Jackson figure, in spite of their penchant for causing damage to the wearers' feet), Zappa asked them to perform it at the end.

It was easy to see why Zappa wanted to witness this particular moment, even out of sequence: it was an interlude between movements, wherein shoe designer Jake (played without puppetry by Robert Walker) hands one of the shoes to harpist Carol Coe, who then runs around the stage pointing it at sections of the orchestra as they improvise to her actions.

The orchestra members seemed to delight in being given such fun tasks. It helped make the oversized crew seem more human.

Zappa described "Mo 'n Herb's Vacation" as a concerto for clarinet and orchestra. The first movement focused on two male dancers stimulated by clarinet music, who fall asleep and have the same dream about two women (the Gossamer Twins) who, in the second movement, are protected from a monster (the Decamorph) by two armored knights (the Gilgamesh Brothers). Zappa admitted that in the third movement, "It gets pretty obscure." Mo 'n Herb's wives appear, and all go to Pamplona, Spain, for the annual bull run.

Before Tandy Beal was recruited, the Oakland Ballet turned down an offer to do the dance portion of the program. There is no ballet, and little dancing. Most of the two hours were filled with eye-boggling choreographed movement, some of it quite difficult, and none of it traditional.

But the Beal dancers did an excellent job of bringing the full-sized puppet theatrics to life. The final work, Varèse-influenced "Pedro's Dowry," was used to demonstrate how the dancers became the puppets by strapping the stuffed bodies onto the fronts of the dancers' torsos, so that the black body-stocking clad humans went almost unnoticed.

Zappa kept quiet about his rock band's performance at Berkeley's Greek Theater July 27. In recent interviews he has said that he uses the money he makes from his rock shows to pay for the orchestral projects, but that it's so expensive with so little return (that is, it doesn't pay for itself and classical critics don't take him seriously), that this will be his last venture into the fine arts.

Let us hope he changes his mind.