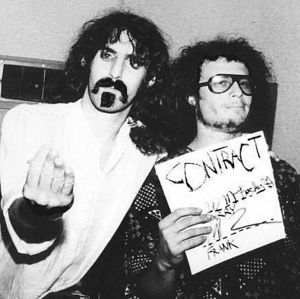 Fischer was institutionalised while a teenager after attacking members of his family. He was diagnosed with the mental disorders paranoid schizophrenia and manic depression. After his release he lived on the streets, making up songs that he would sing for passers by for 10 cents. It was during this period that Zappa 'discovered' him. Fischer performed with The Mothers and recorded An Evening With Wild Man Fischer with Zappa.

(Girls Together Outrageously). The front door was open. A guy walked in off the street and introduced himself as The Raven, and said that he had something for me. First he handed me a bottle of fake blood with a rag in it, said, "I have isolated The Specimen!" and pulled

Fischer had a number of friends who would let him stay with them but his aggressive behaviour and tendency to throw things in frustration often meant that the visits were short. It was after one such throwing incident, narrowly missing one of Zappa's children, that Zappa refused to have anything more to do with him.

"...that guy in there asked me to say something about Wild Man Fischer and one thing that you must remember is that he actually IS a Wild Person. He lives in the street and, er, sleeps in places where, er, it is possible for natural objects to accumulate in his hair; and on his clothes; and elsewhere in secret parts of his personage that you don't find out about until its too late if you're a girl."

"And Larry Fischer IS dangerous; er, he has brothers and other relatives and some of them have been attacked by Larry. I think it was his brother who had his chest-bone broken with a ball-peen hammer at UCLA shortly before this album was made. They were walking towards each other on the campus; Larry had the hammer; and his brother had the bad luck."

After parting company with Zappa Fischer recorded songs for Rhino Records, and with Barnes and Barnes, Dr. Demento, Mark Mothersbaugh and a duet with Rosemary Clooney. In 1981 Fischer released a revenge song called Frank. In 1999 Fischer released a song called I'm Sorry, Frank Zappa" in which he apologized for upsetting Zappa and their falling out.

The 2005 documentary film Derailroaded - Inside The Mind Of Larry "Wild Man" Fischer reignited an interest in his music and saw the reissue of his recordings for Rhino Records.

Larry Fischer can be heard on: