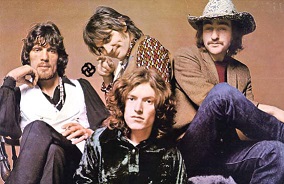 Traffic was a British rock band, known for their psychedelic sound. They were active between 1967 and 1969, after which lead singer Steve Winwood started a new band, Blind Faith.

FZ played their song Heaven Is In Your Mind during "Star Special" as a guest DJ on BBC Radio 1 in 1980.

- Jerry Hopkins: Are there any groups in the business you feel have any legitimacy?