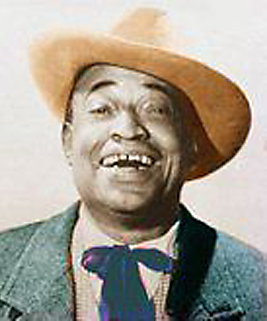 Tim Moore was born Harry Roscoe Moore, one of thirteen children of Harry and Cynthia Moore. The elder Moore was a night watchman at a brewery. Tim dropped out of school to work at various odd jobs in town and also danced for pennies in the streets with his friend, Romeo Washburn.

"It is a pseudo-negrocious dialect, originated by an actor named Tim Moore in the TV version of ‘AMOS & ANDY’. He was severely punished for it. The N.A.A.C.P. made him pay for his own ‘one-way ticket to Fresno’. It is the tradition in America to reward artistry with contempt and ignorance with outrageous praise. Americans live in terror of excellence and will do ANYTHING to avoid contact with it. Those who attempt it are murdered by prolonged exposure to video radiation."

Stage character "Frank" explaining the dialect of "Thing-Fish" and the "Mammy Nun Ensemble" in Them Or Us (The Book), page 262