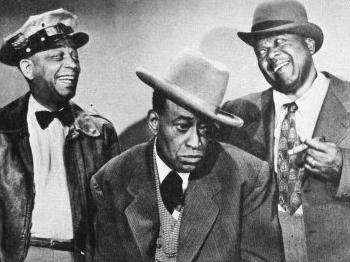 
Amos 'n' Andy was a situation comedy popular in the United States from the 1920s through the 1950s. The show began as one of the first radio comedy serials, written and voiced by Freeman Gosden and Charles Correll and originating from station WMAQ in Chicago, Illinois. After the series was first broadcast in 1928, it grew in popularity and became a huge influence on the radio serials that followed.

Ike Willis used the jive talk of these Afro-American stereotypes in the song You Are What You Is ("he talks like a Kingfish from the Amos 'n' Andy") , on the album Thing-Fish (a pun on Amos 'n' Andy character Kingfish) and during the cover of Purple Haze on The Best Band You Never Heard In Your Life.