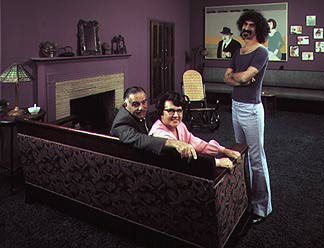 Frank Zappa and his parents

Frank Zappa, 31, leader of the Mothers of Invention, likes to call himself a "creep," and says his upbringing made him that way. "I always felt my parents had a boring life," he explains. "They spent most of it watching TV. I wanted to entertain myself, so I steered myself in the other direction." As a consequence, between ages 18 and 21 Frank was alternately kicked out of the house and kept in "protected custody," as he puts it. "My father was afraid the neighbors would see me, but afraid if I moved out I might do something worse."

Francis Zappa worked hard as a college history teacher, a government meteorologist and a mathematician to secure his family's place in the middle class. He is now retired and seems to eagerly identify with his son's success. When asked to be photographed with Frank, the senior Zappas chose his Los Angeles living room instead of his own. "I played guitar ," his father explains, "and I think that inclined Frank to music. I had hoped he would follow something like what I had done , but later I realized that this was not his bag."

"My father has ambitions to be an actor," Frank confides. "He secretly wants to be on TV."

Mrs. Rosemarie Zappa has an offhand approach to her famous son. "The thing that makes me mad about Frank," she says, "is that his hair is curlier than mine – and blacker."

From the September 24, 1971 issue of LIFE magazine featuring a set of short articles depicting "Rock Stars" at home with their parents. The article also featured Grace Slick,David Crosby and Joe Cocker.