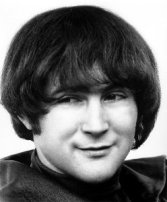 David Crosby (1941) is an American rock singer and guitarist, founding member of The Byrds and Crosby, Stills & Nash.

In 1966 David Crosby performed at The Big T.N.T. Show, where Frank Zappa was filmed inside the audience.

The man can be seen on the album cover of We're Only In It For The Money. [1]

Crosby is referenced in Do You Like My New Car?: "Three unreleased recordings of Crosby, Stills, Nash & Young!"

He is referenced again in Billy The Mountain: "Where David Crosby flushed away all his stash."