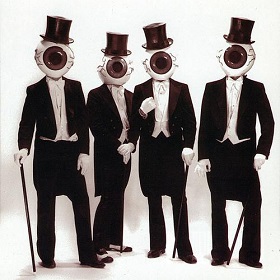 The Residents are an American avant-garde rock band who have been active since the early 1970s. The band is notorious for their strange, haunting, amusing and dissonant songs, some of which are covers of well known popular songs. The band members are always masked during live concerts and their identities remain a mystery to this day.

The group cites Captain Beefheart and Frank Zappa as two of their prime influences. Their first official release, "Santa Dog" (1972) was mailed to various recipients, including Frank Zappa and Richard Nixon. Zappa never replied since the address was incorrect.