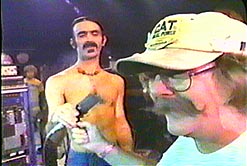 Zappa and Phil Kaufman in the film Baby Snakes, where Kaufman plays "the human trombone".

Kaufman has worked with Gram Parsons, The Rolling Stones, Emmylou Harris, Joe Cocker, Etta James. He also had a past as B-movie actor and was a fellow prisoner alongside Charles Manson before the 1969 Manson Murders. Kaufman later produced his album Lie: The Love and Terror Cult. The man is additionally infamous for reburying Gram Parsons' body, as a result of a pact he made with him before his death. [1]

On 11 September 1977, after Zappa's road manager Ron Nehoda committed suicide, Kaufman was quickly brought in as his successor. He remained their road manager until April 1978.[2] He can be seen in the film Baby Snakes mimicking a trombone just by making vocal sounds. Zappa based the song Why Does It Hurt When I Pee? on an incident when Kaufman actually asked this question after leaving the toilet. [3] [4]

In 1993 Kaufman published his autobiography Road Manager Deluxe, for which Zappa wrote a little acknowledgement. [5]