No Commercial Potential: The Saga of Frank Zappa 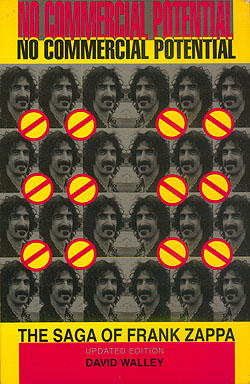 Book cover for "No Commercial Potential"

"One of the most entertaining rock and roll portraits to come barreling down the turnpike in quite some time."

"[A] well-balanced, well-researched view of Zappa as enigma, as culture hero, as artist, and as humang being... No Commercial Potential also serves as a slice of cultural history, as a portrait of the period and the milieu out of which the Mothers sprang, of the strange leap from L.A. drive-in hot dog culture to psychedelic freak power... This is a serious and thoughtful book. It deserves to be read."

"With admirable aplomb Walley takes a fine comb through the tangle of Zappa's past, his extensive recording, his often ambivalent relationships with coworkers and associates. What emerges is a biographical portrait that covers all bases with a minimum of waste, cutting to the heart of every matter under discussion. Nor does the book remain safely dispassionate... [Walley's] ability to be both inside and outside the narrative gives the work its razor edge."

"This book is going to be around for a long time."

"For nearly thirty years Frank Zappa (1940-1993) pursued an idiosyncratic but influential course in music - rock, jazz and classical composer (releasing over fifty albums); founder of the Mothers of Invention; guitarist, conductor, and producer, as well as social satirist, sonic scientist, First Amendment champion, and all-around iconoclast. This updated edition of David Walley's cutting-edge classic includes a new foreword, a substantial chapter carrying the Zappa saga through his death from cancer, an afterword, bibliograpy, discography, videography, and guide to Zappa on the internet. From 1960's Freak Out! to the posthumous Civilization Phaze III, No Commercial Potential offers converts and connoisseurs the most practical and penetrating book ever written on the musical phenomenon known as Frank Zappa."