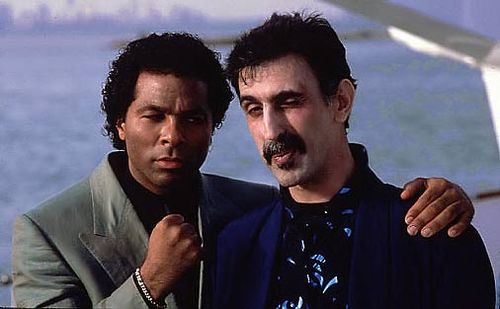 Philip Michael Thomas and Zappa backstage at the set of "Miami Vice".

"Miami Vice" (1984- 1990) was a popular American TV show about police officers who fought against the illegal drug trade and organized crime in Miami.

In the episode "Payback" (March 14, 1986) Zappa played the role of drug dealer Mario Fuente. He only agreed to play the part since Dweezil Zappa was a fan of the show. Zappa himself hated the program.

The interview Frank Zappa and His Digital Orchestra took place after Zappa recorded his cameo role. After fulminating his disgust, he concluded: "I'm really glad I did it though because it was so sick. It's really one of the sicker things that a human being can do."

Don Johnson was mentioned and thanked in the liner notes of The MOFO Project/Object (2006) album. [1]