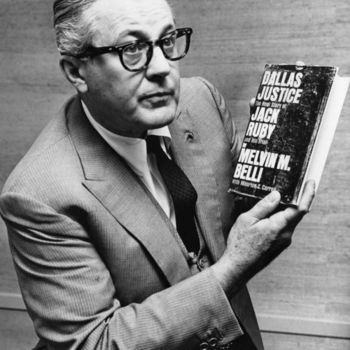 An indifferent student, he went to sea briefly after graduating from college and before entering law school. On graduating (1933) he became an undercover investigator for the National Recovery Administration, posing as a hobo to report on the plight of migrant workers. Setting himself up in private practice, he soon became the flamboyant master of "demonstrative' evidence - dramatic gestures and graphic exhibits designed to sway juries. Known as "The King of Torts" for his propensity for taking personal injury cases and for his celebrity clientele that included Zsa Zsa Gabor, Lana Turner and Tony Curtis. Belli won record damages and set legal precedents in numerous cases. Although his specialty became malpractice and negligence litigation, he was best known to the public for colourful and bizarre cases such as the defense of topless waitresses and of Jack Ruby, the killer of Lee Harvey Oswald; Oswald is pictured in the collage on the "We're Only In It For The Money" (1968) cover.

His involvement with Hollywood, led Belli to take the occasional acting job beginning with a memorable appearance on the original Star Trek, in the episode "And the Children Shall Lead", where he played Gorgan, an alien corruptor of youth. He subsequently cameoed in "Wild in the Streets" (1968) and played small roles in but a few more films. He was also a prolific writer of books for both the legal profession and the public.

Frank Zappa mentions Melvin Belli in his list of influences inside the sleeve of Freak Out!, under the heading: "These People Have Contributed Materially In Many Ways To Make Our Music What It Is. Please Do Not Hold It Against Them".