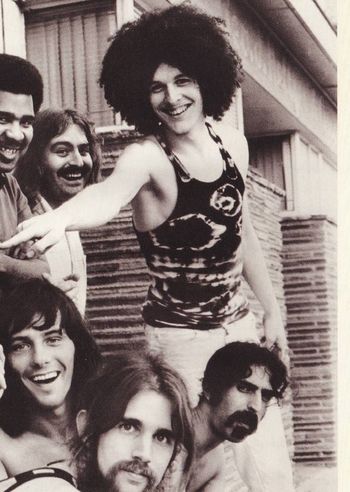 Jeff Simmons, aka Robert Sumpner Jr....Jet Sims....Junior Turlock... (along with another half dozen pseudonyms) (May 1949, Seattle, Washington) is an American rock musician and former member of Frank Zappa's Mothers of Invention. Simmons provided bass, guitar, and backing vocals for the group between 1970 and 1971, returning on rhythm guitar in 1974.

Jeff Simmons first came to the attention of Frank Zappa as a member of the Seattle-based group Easy Chair. When the "chair" opened for the Mothers at the Seattle Arena, Frank's interest was piqued and as a result they were signed to Straight/Bizarre Records. Easy Chair became part of the legendary Bizarre "Gala Pre-Xmas Bash" on December 6 & 7, 1968 (along with The Mothers, Larry "Wild Man" Fischer, the GTO's, and Alice Cooper) at the Shrine Exposition Hall in Santa Monica.... Easy Chair were handed over to Jerry Yester and Zal Yanovsky for production but time dragged on and the band parted ways.

Simmons was then signed to Straight Records to record two albums: one a - mostly instrumental - soundtrack for the obscure biker film "Naked Angels" and the other "Lucille Has Messed My Mind Up". Zappa contributed generously to the second album, under the pseudonym LaMarr Bruister. (Zappa wrote the title track - which he later recorded for Joe's Garage Act I, co-produced the album - with engineer Chris Huston, played lead guitar on Lucille Has Messed My Mind Up and Raye, and co-wrote Wonderful Wino with Simmons).

Simmons was then tapped by Frank to play bass for a one-off "Hot Rats" concert, and soon after to join The Mothers. Though he played both bass and guitar in the MOI, Jeff considered himself honored to follow "such a great bassist as Roy"... Simmons is the transitional Mother and was equally at home with the rock and the jazz. Playing alongside Ray Collins, Don Preston, and his tutor for the Zappa book Ian Underwood, Jeff cut his musical teeth with some of the heaviest including the great George Duke, Aynsley Dunbar and the Fowler Bros.

Jeff can be seen in the Zappa movie The True Story Of 200 Motels, even though he "left the group just before the movie started".

FZ as a guest DJ in 1980 for BBC Radio 1, played "I'm In The Music Business" during the Star Special.