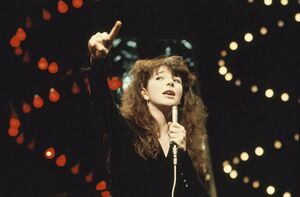 In a "Smash Hits Magazine" interview from 1980 Bush named Frank Zappa's Over-Nite Sensation as her number one favorite album. She said that Montana was the first Zappa track she ever heard and "it's stuck as a firm favorite". Her number two album is by "Blow Boys Blow" by A.L. Lloyd and Ewan MacColl, whose The Handsome Cabin Boy she covered in 1991 on her album "Back Sides". She also listed Captain Beefheart's "Bluejeans and Moonbeams" on number 7 of her 10 favorite albums. [1][dead link]

Kate Bush: "I never challenged or asked for the serious interpretation and evaluation of my music. A sense of quality does not exclude humour."

Interviewer: "Do you have an ideal or predecessor for that?"

Kate Bush: "Frank Zappa was a very smart man. He said that, as an artist, you can live a free and untamed life, in case you have a solid family life. I love this idea."

Kate Bush: "I´ve never met Zappa, but people who have portray him as a very dear person, different from his image. I have always preferred my privacy over my public life, because I work best with a stable home base. The idea that the artist who suffers is the best doesn´t apply to me. I work better, when I´m fine."[2]