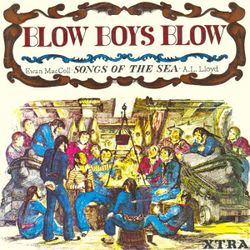 The cover of the re-issue on Xtra.

"The Handsome Cabin Boy" is one of the traditional sea shanties from Blow Boys Blow a collection compiled by Ewan MacColl and A L Lloyd, released on Tradition Records (TLP 1026) in 1958. Available on Apple Music, Spotifyand YouTube.

In the liner notes of The Lost Episodes Zappa said he enjoyed listening to Blow Boys Blow. He once lent it to Captain Beefheart, who never gave it back, claiming Zappa had given it to him it and that it was his favorite record too. [1].

Zappa played "The Handsome Cabin Boy" from the album as a guest DJ for KSAN, San Francisco on 10 November 1968.

"He knew a lot of folk songs, sea chanteys. Who would expect a rock band to be listening to A.L. Lloyd and Ewan MacColl sea chanteys? In all things unusual, he had an interest." [2]