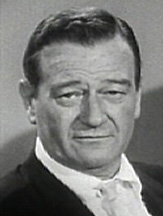 John Wayne (May 26, 1907 – June 11, 1979) was an American film actor, best known for his roles in westerns and military movies. Wayne became an American icon and a symbol of rugged masculinity. For most of his career he was known as a vocally conservative Republican and anti-communist. He was a vocal supporter of the House Un-American Activities Committee. During the 1960s and 1970s he rallied support for the Vietnam War and politicians like Richard Nixon and Ronald Reagan.

Wayne was also controversial since he made so many military movies, but actually never performed his military duty during World War II. He also believed that the American colonization of the Wild West detrimental to the Native Americans was justified.


[...] On Halloween night 1965, during the break before the last set, I was sitting on the steps in front of the place, wearing khaki work pants, no shoes, an 1890s bathing shirt and a black homburg hat with the top pushed up.


John Wayne arrived in a tux with two bodyguards, another guy and two ladies in evening gowns – all very drunk.


Reaching the steps, he grabbed me, picked me up and started slapping me on the back, shouting, "I saw you in Egypt and you were great ... and then you blew me!"


I took an immediate dislike to the guy. Remember, all kinds of show people went to this club, from Warren Beatty to Soupy Sales, so it wasn't unusual for someone like "the Duke" to show up.


The place was packed. When I got up on stage to begin the last set, I announced: "Ladies and gentlemen, as you know, it's Halloween. We were going to have some important guests here tonight – we were expecting George Lincoln Rockwell, head of the American Nazi Party – unfortunately, he couldn't make it – but here's John Wayne."


As soon as I said that, he got up from his table, stumbled onto the dance floor, and started to make a speech. I leaned the microphone down so everyone could hear it; something along the lines of " – and if I'm elected, I promise to ..." At that point, one of his bodyguards grabbed him and made him sit down. The other one handed the microphone back to me and told me to cool it or there was going to be BIG TROUBLE.


At the end of the show, the manager of the club came over to me and said, "Be nice to the Duke, because when he gets like this he starts throwing fifty-dollar bills around."


I had to pass his table on my way out. As I went by, he got up and smashed my hat down on top of my head. I took it off and popped it back out. This apparently annoyed him, as he shouted, "You don't like the way I fix hats? I've been fixin' hats for forty years." I put it back on my head and he smashed it down again. I said, "I'm not even gonna give you a chance to apologize," and walked out.

Zappa listed John Wayne in his Freak Out! list.