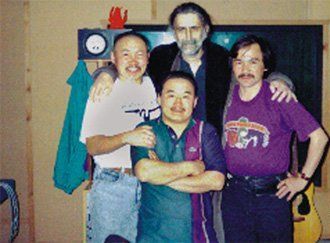 Huun-Huur-Tu is a Russian folk music band, hailing from Tuva and known for their throat-singing.

On 2 January 1993 Matt Groening approached Huun-Huur-Tu after a concert in Caltech, Pasedena, California and invited them to Zappa's house in 1993 [1] , where they attended several Friday Night soirées. One of their performances was accompanied by Kongar-ool Ondar, who wasn't a member of their band, but also an accomplished throat-singer. Kongar-ool Ondar's performance with Huun-Huur-Tu, The Chieftains, L. Shankar and Johnny "Guitar" Watson on 8 January 1993 was filmed by a BBC camera crew making the documentary BBC Television Tribute (later rebroadcast in the U.S. as the A&E Biography). [2]

According to the booklet of Huun-Huur-Tu's Horses In My Herd their song Song of the Caravan Drivers was a favorite of Zappa, which is why they dedicated it to him. [3]

Tuva, Feynman, Zappa, and Beefheart; A Story About a Web.