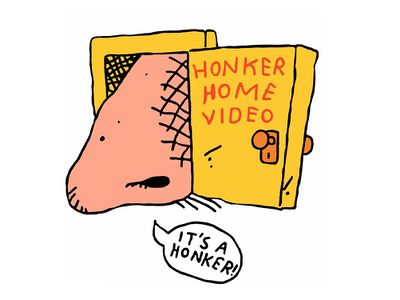 Honker Home Video is a video company founded by Frank Zappa in 1985. It released all his video material. The logo was based on Zappa's nose and designed by Cal Schenkel.

The name Honker also turns up in a 1987 article by Zappa: Church of American Secular Humanism: "The ancient writings didn't mention a Nixon-appointed judge named Brevard Hand, but they should have. His ruling in the controversial Alabama School Textbook Case provided the Final Sign From On High which led the unpredictable Mr. Honker to file articles of incorporation in the State of Alabama for C.A.S.H. – CHURCH OF AMERICAN SECULAR HUMANISM."

"I came to it late, but I've always been interested in the way in which pictures work with music and the problem about doing more of it is that a visual medium is a far more expensive medium that the audio medium. An independent guy can afford to make an album easier than he can afford to make a movie, or then he can afford to make a video, and have some quality in it. So there's only occasionally that i can scrape up enough money to do a project that involves pictures and music. So that part of my work is less known than the records that I have out and that's one of the reasons for putting Honker Home Video together because at least with that company, some of the things that I've done working with visual stuff can be gotten out to the public." - Frank Zappa, Interview by Bob Marshall, 1988.

"I think it was the first time an artist developed his own label in home video – unless you want to start calling Jane Fonda's workouts a label," says Ali. "What was interesting about Frank's idea for a label – and we shared it with him – was the idea of really exploiting home video for everything that it stood for, which was the last bastion of the ability to deliver truth and points of view. If you look at his programming or listen to the lyrics of his music, you know there's always an element of that in everything that he does." - Waleed Ali, head of MPI, quoted from We Are What We Watch, Interview by Jim Bessman, Billboard, May 1990.