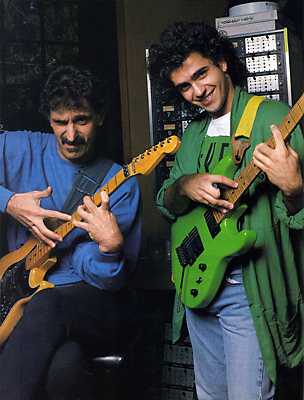 
Our 20th Anniversary issue required a unique Soundpage, and here it is: our first extended-play recording (40% longer than usual), our first digitally recorded and digitally mastered Soundpage, and the world premiere of the live version of "Sharleena." Recorded at the Universal Amphitheatre in Los Angeles on December 23,1984, it was the very first time that Frank Zappa and Dweezil Zappa teamed up on twin guitars in concert.

An earlier version of "Sharleena" appeared on Frank's 1984 LP Them Or Us (Barking Pumpkin, SVBO 74200]; Dweezil also contributed a solo to the studio recording. The Soundpage version is significantly longer than the four-and-a-half-minute studio cut. The live cut – in perhaps a still longer version – will appear on You Can't Do That On Stage Anymore, a Rykodisc CD scheduled for mid '87 (Barking Pumpkin plans to release a 10-album LP set under the same name in early '87; for information on Zappa records, CDs, and concerts, dial 818-PUMPKIN).

Whip the Soundpage onto your turntable, fire it up, and start enjoying the soulful ensemble vocals and the rhythm section's infectious groove. At about two-and-a-half minutes into the cut, Dweezil begins his solo; a minute after that, his father comes in on co-lead guitar. It's a remarkable performance by any standard, but it's astonishing given the relatively brief time Dweezil had been playing guitar.

Exploring the details of Guitar Player's special 20th Anniversary Soundpage, here are brief interviews with Frank, then Dweezil, with additional comments from Steve Vai. For more on (and from) Frank Zappa, see page 14.

How much time did you and Dweezil rehearse before performing "Sharleena" onstage?
None. It was the last concert of the 1984 tour. I'd been on the road for six months and had just gotten back to town. Dweezil had been rehearsing away, and since we were working at the Universal Amphitheatre, I knew that he wanted to go onstage. He had played a solo on the album version, so he already knew the song. It was just a matter of him coming down to do the soundcheck in the afternoon and getting his equipment set up. That was the first and only time that he and I had ever played together live.

Was it mainly his idea? Did he come to you and say, "How about if I sit in tonight?"
Yeah.

What sort of guidelines did you have? Did you talk it over ahead of time?
No, but it wasn't the first time Dweezil had appeared with the band. He made his debut onstage with the group in Europe when he was 12 years old in 1982. He played with us at the Hammersmith Odeon in London, on two of the three days we were there, and also in Munich, Vienna, and I think one other city. But I was conducting on those, and the Los Angeles performance was the first time that he and I played lead guitar together. When two lead guitar players perform together, I think it usually turns out like noise. It's not one of my favorite things on this planet to listen to or participate in.

What made this duet work so well?
At least I had the good sense to stay out of his way [laughs]. My goal was to make a piece of music there, not to play competitively or to dump your bag of tricks on the stage. Usually that is not what happens when jam sessions occur. Usually jam sessions are exercises of egomania.

From the time Dweezil first picked up a guitar, how long was it before he joined you onstage for those European dates?
A little over a year. He played on a heavy metal tune that we were doing called "Stevie's Spanking," which is another one from Them Or Us that he did with us in the studio. Onstage, since I was conducting, I had to tell the band to kind of run interference. Although Dweezil had a lot of manual dexterity when he started off, he had problems with rhythm – counting where to come in and what to do, just like most beginning musicians have a problem with that sort of thing. He was also limited in the number of keys that he could play in, and I had to modify the arrangements a little bit in order to put things in a comfortable key for him during his part of the solo. I would give cues for the modulation back to the right key and that kind of stuff. So it's not easy under those conditions to jam away with your son on the stage. But by 1984 he had gotten enough skill and had also recorded that song one time, where it wasn't a big mystery for him to get up there and play the solo.

Compared to the album cut, his style had developed significantly by the time of the Soundpage version.
Considering how much he practices, I wouldn't expect anything less from him. He practices a lot. He goes about five hours a day, and right now the number of days that he can do that is determined by what kind of film calls he's going out on and stuff like that. He usually practices every spare moment.

On the live version, is that Scott Thunes on bass?
Yes, and Chad Wackerman on drums. The keyboardists are Alan Zavod and Bobby Martin, and the vocalists are Bobby Martin, Ike Willis, and Ray White. Ike and Ray both play guitar.

When mixing the two lead guitars, did you intentionally avoid a hard left and right separation?
Yes, because Dweezil starts off first, and if he were to be off to one side it would have been kind of obnoxious. I'm not sure if that kind of separation really obviates what the musical activity is, but I think it makes an obnoxious-sounding record anyway. When it's placed hard to one side, it's a mono signal – it sticks out, especially when you're wearing earphones.

How many tracks was it recorded on?
The original was a 24-track digital recording, and the remote was my truck, the UMRK (Utility Muffin Research Kitchen) mobile. The mix was done here in the UMRK. The live recording engineers were Mark Pinske and Tom Ehle, and the room mix engineer was Bob Stone.

What was your guitar equipment?
A blonde Stratocaster, a Marshall amp, and two small Acoustic amps.

What's it like having your son in your band, or playing lead guitar for you?
He wasn't really in the band; he was just sitting in. Having him sit in, that's fine. I don't think he would desire or even enjoy being in one of my bands, just because the style of music that we play is so much different than what he likes to play. But I like musicians of any description under any circumstances when they are playing good music.

Dweezil Zappa recently turned 17, and was 15 when the Soundpage was recorded. His first record was a 1982 12" single ("My Mother Is A Space Cadet"/"Crunchy Water"), and his new album, Havin'A Bad Day [Barking Pumpkin, ST-74204], was reviewed in last month's issue. He also plays on Don Johnson's Heartbeat [Epic, 40366], which is the Hill-ranked album in America as we go to press.

Steve Vai is an alumnus of both the Frank Zappa band and Alcatrazz. Himself a Soundpage veteran (his incredible "The Attitude Song" inaugurated the Soundpage in our Oct. '84 issue) and winner of Guitar Player's 1986 Readers Poll as Best Rock Guitarist, he is currently on tour with David Lee Roth. A few years ago, shortly after Dweezil Zappa took up the guitar, Steve shared some pointers with his friend. For Dweezil's brief interview (look for a full length feature in an upcoming issue). Steve provided these introductory comments:

"When we started working together about five years ago, Dweezil was an absolute beginner. He couldn't even hold a pick. He couldn't hit one note without accidentally hitting four or five other strings. I gave him lessons here and there. He'd bring me things like Van Halen solos, and he'd want me to figure them out and show them to him, and turned him on to Randy Rhoads and other players. I told him about Yngwie Malmsteen and said, "Hey, you should hear this guy."

"A couple of months later, Dweezil's down in his basement and I'm hearing these things come out of there, and they sound like Van Halen and they sound like Yngwie. Next thing you know, he's a terrific guitar player himself. He progressed at a rate that was phenomenal, a rate that I have never seen in another musician. Within a year-and-a-half of being a total beginner, he was an accomplished guitarist with a lot of technique.

"Dweezil emulates very well, and he started doing it at an age that a lot of players start doing it, around 12. But at the same time – and here's where he's different – he's. asserting his own identity at a very early stage. I think Dweezil is a musician of the future. He has good ideas, and at the rate he's going, he's definitely one of the guitar players of tomorrow."