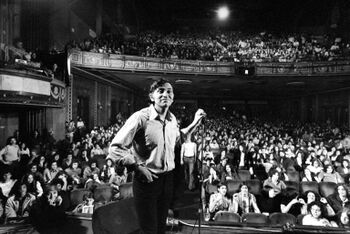 Bill Graham on the last night of the Fillmore East. 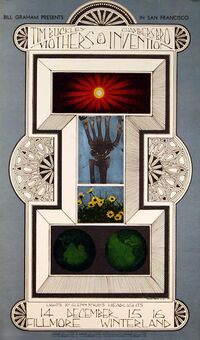 Originally built in 1912 it functioned as a dance hall and roller skating rink called the Majestic Hall. In 1954 it was renamed The Fillmore Auditorium. In 1965 Graham used the Fillmore's permit to put on a benefit show. He continued to use the venue for the next two years. Zappa and the Mothers regularly performed there throughout those two years:

As the Fillmore Auditorium only had a capacity of 1300 Graham would book the Winterland Ballroom, which had a capacity for an audience of over 5000, for Friday/Saturday shows expected to draw a larger audience; as was the case for the 15 - 16 December 1967 and 07 - 08 June 1968 shows.

In March 1968 Graham opened the Fillmore East in New York taking over the 2700 capacity Village Theater which had been putting on concerts from 1965 to 1968 - Zappa and the Mothers had played there once in 1967. The Fillmore booked bands to play an early (8pm) and late (11:30pm) show. The late shows could finish at dawn. Zappa and the Mothers were regular performers:

The Fillmore East closed at the end of June 1971. 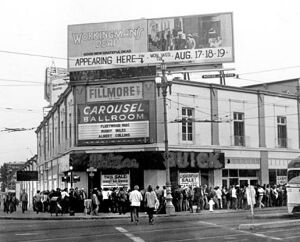 Abandoning the original Fillmore Graham moved down the road to the Carousel Ballroom, which at 3000 offered more than double the capacity, naming it Fillmore West. It opened on 5 July 1968 and operated until 4 July 1971. Zappa and the Mothers appeared here in November 1970: