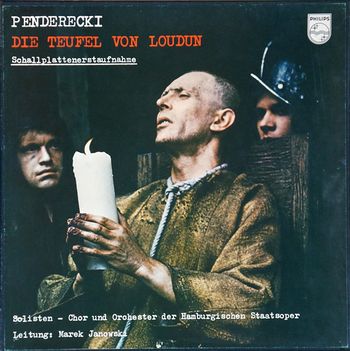 Die Teufel von Loudun (The Devils of Loudun) is a 1969 opera by Krzysztof Penderecki, based on the eponymous novel by Aldous Huxley. It was his first opera. The album recording was conducted by Marek Janowski and the Hamburg State Orchestra, released by Philips. Soprano singer Tatiana Troyanos performs the part of Jeanne.

In Classical Zappa Zappa also cited it as his favourite opera, because he "liked the enema scene." He added some more details about his appreciation during a 1975 radio interview:

"This Catholic Polish gentleman which writes very interesting music doing this opera with religious and demonic overtones (...) The thing that knocks me out: I've got this Philips recording with Tatjana Troyanos singing the lead vocal in this enema sequence where's to exercise Asmodeus who is supposed to be lurking inside her bowel, according to the text by Aldous Huxley. They have to take her behind the screen on stage and pump her up in sort of philosophical sense with some, unseen by the audience, herbal burbling enema. And the music he has going on for that scene is very ingenious, you know. You hear the bubbles and she is singing interesting little screams and grunts and stuff. I'd say: "That's a step forward." There's not too many things in rock 'n' roll that can compare to that. I put it right up alongside of "Voulez-Vous Couchez Avec Moi", one of those funk tunes." [1].

It's interesting to note that Titties 'n Beer features an appearance by The Devil, while Legend Of The Illinois Enema Bandit deals with enemas. Both songs appeared on the same album too: Zappa In New York.