An Evening With Pierre Boulez And Frank Zappa 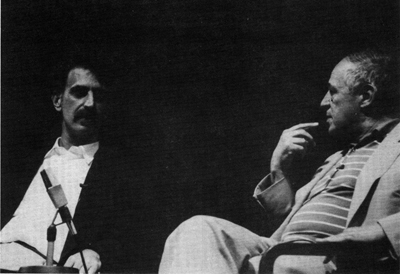 As we all know, Frank has a friendly working relationship with French composer/conductor Pierre Boulez, resulting in the 1984 collaboration 'The Perfect Stranger' and a concert in Paris in January of that year. On May 23 1989, the Los Angeles Philharmonic and the UCLA Music Department presented 'An Evening With Pierre Boulez and Frank Zappa', in conversation at Schoenberg Hall at the university.

The presentation, which was preceded by a short press conference and photo opportunity, was sold out, and attended by such luminaries as the entire Zappa family, Mike Keneally, Scott Thunes, Bob Rice, Denny Walley, Janet the Planet, Laurel Fishman and Eric Buxton. It was hosted and 'moderated' by a fairly well-informed gentleman by the name of David Braxton. The evening was divided into two parts, the first comprising conversation on music and related subjects by the three participants, followed by a lengthy segment where previously written and collected questions from the audience were presented.

As we would expect, Frank stole the show with his comments and wisecracking demeanour, inducing constant eruptions of laughter and applause throughout the evening. Because he so dominated the affair with his natural comic abilities and intelligent comments, and because this publication is devoted primarily to Frank, this article will focus solely on his comments. The following is an excerpt from the affair. The order in which the questions and comments are presented here have been changed quite a bit, in order to make this article 'flow' better.

In a recent 'People' magazine article, you said that you were quitting music and you were going into business. In 1972, you said 'It's inevitable I will extend my ideas into other fields, but it's all music.' If it's all music, why do you say you're quitting music?
This is a good question. The part of the music that I would like to get away from is the music BUSINESS. That's the bad part. The music I love. I still write music. I do it every day with a little machine. I still do music. The part that's bad, the part that's boring, is dealing with people within the music BUSINESS. You make a piece of music, then you have to go through all these stupid merchandising channels in order to try and bring it to an audience who won't even know it's there because you can't get it on the radio. This is fairly frustrating after about twenty-five years in the rock and roll business. There are other things in life that a person can do with the use of imagination.

The process of writing a composition is the process of organising material. For me, I don't know if it is for Pierre. But if you take any lump of musical ... STUFF, rhythms, melody, harmony, whatever you want to, it falls into that category, and that's your raw material. You can make, from this raw material, a composition by organising it. If you use that concept on anything else, any other material in any other field, you can use the same musical imagination to organise other ideas, objects, procedures, whatever. So if I'm working within the field of business, like I'm doing some stuff in Russia, it is like doing a composition. You find things that go together with other things that work and you organise them. It has been my experience, since starting in this direction, that the people that I'm working with are a lot nicer, a lot more honest, and it's a refreshing change from THE MUSIC BUSINESS.

Do you still think that students in universities are studying a dead language in a dead institution with dead professors?
Well, yes! A lot of times, composers will come to me and say 'Well, what do I do?' I tell 'em 'Get a real-estate licence, because if you expect to write music in the United States, what are you going to do for a living? If you want to be a composer in the US, you must write for the media. You can't just write music because you're writing music. You have to have some other kind of a job to support your habit.' It's a sad story, but it's true. And when a person goes to a college and pays money to attend a class to learn to be a composer, unless that teacher tells you something that will enable that student to get a job, and earn a living, and feed himself, he's going to be a burden to society.

Any thoughts regarding the encouragement of creativity in children or students?
(smiles and says in a mock whisper) Real estate licence!

Do you find that people with learning differences are more creative?
Yes, they are, and the reason I think so was because my children have certain difficulties with learning, and I support these difficulties, because they found they had difficulties with learning when I sent them to school. And the first way that I dealt with this difficulty is I took them OUT of school, and they've been fine ever since. I would recommend to anyone who has children with learning disabilities, you can, under California law, keep your kids at home, get 'em out, get 'em away from the crack and the rest of the stuff. Stick 'em in the kitchen, get a book and teach 'em yourself.

When will 'Chunga's Revenge' be out on CD?
Soon.

What do you think the most important word in the English language is? Also the least important? (David Braxton says 'This is a tough one'.)
It's an easy one... FUCK!

Is there a God?
What I wanna know is why would a person come HERE to ask this question?

What about IRCAM West under the new Disney concert hall downtown (in LA)?
I think it's a good idea. I think they ought to have IRCAM West here. The only problem is: What do you do with it after you build it; who's going in there; and what are they going to listen to, and WHY will they go? The answer: White wine! (IRCAM is in Paris. It was set up by Boulez as a research and recording centre for electronic and acoustic music. It's close to the Pompidou Centre, and if you're ever in Paris, it's well worth a visit.)

On forming a World Orchestra

About four months ago, I made a proposal to the World's Fair organisation, the next one is in Seville 1992, and I offered to put together an orchestra that was made up of ethnic instruments, people who could play ethnic instruments from all different countries who could also read music and could play different styles, and could combine these with electronic instruments and normal orchestral instruments. Part of the project was that the people from Expo would commission composers around the world to write five to eight minute pieces for this orchestra. In other words, if you wanted to, if you were a composer that wanted to have access to these special ethnic instruments, it could be very difficult for you to afford to gather together, from all over the world, these different pieces of equipment, and have people who could read music and play it. It would be creating a vehicle that would provide an opportunity for a lot of composers. The status of the project is this: I'm going to Spain on May 28, because I've been told that the Christopher Columbus Committee, which is another organisation from Madrid which is putting on a big event in 1992, wants to finance the orchestra. I will believe it when I get a contract for it, but if they decide that they will finance this orchestra, I will then get on a plane and start shopping for musicians all over the world. I will get this together for them, and I spoke to Pierre the other day at breakfast and invited him to write a piece, (with mock anger) but HE'S TOO BUSY THOUGH!

Why are serious jazz composers and performers more successful, and more people listen to their music (than contemporary classical composers)?
Well, I don't know whether that's a fact or an opinion. If it were a fact, my first guess would be that when you listen to jazz, you get to drink things.

There are some musicians that are performing today that I think are totally worthy of respect and fantastic on their instruments, but I must confess that I'm not a pop music consumer, so I don't listen to the radio or spend a lot of time trying to figure out what the greatest group is today ... There are excellent musicians. I know, I hired them.

On minimalism and Philip Glass

I've never heard any compositions by Philip Glass. (Smirks) I take it they have a lot of repeat signs.

Once upon a time, when I was an impressionable young composer, somebody gave me a John Cage record and I listened to it, and went 'What the fuck is this?' But since I didn't know what the fuck anything was, I thought 'Maybe this is really good.' A short time after that, John Cage came to Claremont College and he was giving one of his ... he does these performances with a throat microphone. He'd put this thing on his throat and drink a quart of carrot juice, or read something to you while he was drinking the carrot juice. In a way, this ties in with my over-all feeling towards colleges. In this instance, there was a college audience watching John Cage drink the carrot juice and do these things, and they were pondering it like it had this large significance. It occurred to me that if he could do that, then certainly, SURELY there were other things equally ridiculous that a person such as myself could do in the music business. And so I decided that I would try, not necessarily to gargle with the carrot juice, but that I'd do other things that come awfully close.

Who do you imagine your audience to be?
If I write a piece of music, the first person I write it for is me ... my own music. The attitude I take is: If I like it, then it is done, and I will try and get it out to the public. If somebody else likes it, then that's a plus, and if they don't like it, than it doesn't matter, because the first audience is me.

On drummers FZ has worked with

They know how to do it and that's why they got the job. Basically the work for the drummer is divided up between keeping time and playing the melody, and wherever it's necessary to play the melody, they gotta play accurately. It's either written exactly on paper, or it's spelled out verbally in rehearsal. There's a particular drum fill called 'Quaalude thunder'. It's required for the drummer to play as many notes as he can on all of his tomtoms in a space this big. (FZ holds his hands up, slightly apart.)

What is your primary goal?
That's easy! I'm still waiting for an accurate performance!

What is the function, if any, of music?
Let me sum it up for you. Information is not knowledge. Knowledge is not wisdom. Wisdom is not truth. Truth is not beauty. Beauty is not love. Love is not music. Music is the best.