Alice Stuart is an American folk and blues guitarist. She is named on the cover of Freak Out! (misspelt as Alice Stewart) having briefly been in the Mothers in 1965 although not recorded with them:

"We had added a girl to the group, Alice Stuart. She played guitar very well and sang well. I had an idea for combining certain modal influences into our basically country blues sound. We were playing a lot of Muddy Waters, Howlin' Wolf-type stuff. Alice played good finger-style guitar, but she couldn't play "Louie Louie", so I fired her." - Frank Zappa in "The Incredible History Of The Mothers" 1968 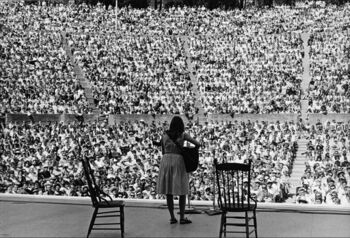 Stuart on stage at the1964 Berkeley Folk Music Festival

Stuart was born in Chelan, WA (June 15, 1942). She played piano and drums as a child progressing to a ukulele and a guitar as a teenager. and began performing folk music professionally in Seattle during the early 1960's. She toured around and briefly dated Billy Roberts (writer of Hey Joe). Arriving in Los Angeles in December 1963 her talents were recognised by the organiser of the Berkeley Folk Music Festival were she performed the following year. She also recorded her first album for Arhoolie Records in 1964. Billboard reviewed the record favourably: 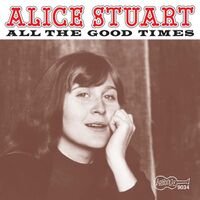 A beautiful new female voice is now on the folk horizon. Its owner's name is Alice Stuart. She sings with a clean freshness that is exciting in its simplicity. A folk find!.

She returned to Seattle were she was billed as The Berkeley Folk Festival Star. Returning to California she planned to put her own band together and drove to Los Angeles to meet a potential band member:

"Actually, Frank and I met in Los Angeles in a coffeehouse. Seems we were both waiting to meet the same person, a great guitarist named Steve Mann. We were about the only people there and we got to talking and when we finally gave up waiting for Steve, we ended up leaving together. We had a fast and furious love affair and tried to incorporate music into the equation. His music was so much different than mine that it was destined to end in disappointment. We loved and cared about each other though. That was when I was trying to go from a folkie to a rocker."- Alice Stuart - Gold From California: Alice Stuart Is Back

"...lead to about a 6 week love affair that turned into an attempt to fit me into the group he had at the time. It was more a blues, cover band then. He wanted to write and create a new kind of music at that point and wanted me to play my Delta style acoustic guitar and to play in and around what I was playing.
At the time, it was just too far out for me. My focus at that point, was to acquire and learn to play the electric guitar. A smile comes to my face when I think about what he did when I kept asking for an electric guitar. He got me one and it was a scream. The strings were really a huge gauge and they were very high off the neck. Totally unplayable by anyone, let alone someone that had never played an electric guitar. It had the desired effect…very discouraging. It was a very small Fender. I still have no idea what model it was." - Alice Stuart: An American treasure