A Talk With Frank Zappa 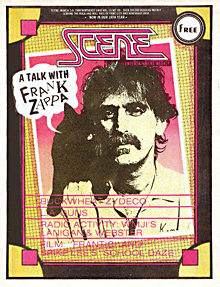 After an absence of a little over three years, Frank Zappa is returning to the concert stage in a major world tour. Dubbed "Broadway The Hard Way," it's an effort by Zappa to bring back the excitement of a real live band at a concert, as opposed to the numerous drum-and-computer wonders of the late '80s. The eleven-piece band consists of Ike Willis, guitar and vocals, Bobby Martin on keyboards and vocals, Chad Wackerman on drums, Ed Mann, percussion, Scott Thunes on bass, and new Zappa discovery Mike Keneally on "stunt guitar," vocals and keyboards. The horn section is comprised of Albert Wing, tenor sax and flute, Paul Carman, altosax, baritone sax and flute, Bruce Fowler on trombone, Walt Fowler on trumpet, flugelhorn and synthesizer, and Kurt McGettrick playing baritone sax, bass sax and E-flat contra-bass clarinet. In this interview, conducted by phone from Boston, I tried to cover many of the topics for which Frank is outspoken, popular, and continually interesting. All of the touring, including the Cleveland date this Saturday, March 5, will be recorded for a live album to be released in the fall. There is also a nationwide voter registration campaign going on at all the concerts, which prompted Ohio Secretary of State Sherrod Brown to name Zappa honorary Secretary of State last week.

Hi, Frank. What's new?
Well, I just got a call from a guy from "60 Minutes." They're going to be doing something on this stuff.

The tour?
Well, they're more interested in the voter registration than rock 'n' roll. We're going to be having dinner with them tomorrow night to figure out what we're going to do. It hasn't even been shot yet.

Have you set up voter registration tables at all of the concerts so far?
Every one. We've been working with the League of Women Voters, and in the cities where they wouldn't cooperate, couldn't cooperate, or didn't have the volunteers, various citizens groups, either with or without the League of Women Voters, have staffed the tables. We expect that we're going to be able to do every single concert on the U.S. tour.

You haven't toured since 1984. What made you decide to tour at this point in time?
Oh, just a whole bunch of stuff. It seemed like the right thing to do, and I did want to get involved in the voter registration. It's one of the things I've been interested in since the 27th Amendment passed in 1971.

How has the audience response been?
Massively enthusiastic. They really love the band because it sounds bitchin'.

Yeah, but you've got a HUGE band on this tour, eleven pieces!
And it's a good sounding band ... It's like ... let's hear some music!

I've heard that one of the many things you're doing on this tour is the first movement of Bartok's third piano concerto. I'm having a hard time imagining what that'll sound like because I've been listening to that for a couple of days now and ...
... isn't that one of the most beautiful melodies you ever heard in your life?

Yes, and I'm hoping you do it in Cleveland.
Well, you know, where we put it? That, and Stravinsky's "Royal March" (from "L'Histoire Du Soldat") are in the middle of "Packard Goose" (from Joe's Garage). Instead of a guitar solo we put those two pieces in there.

You have a new home video label, Honker Home Video, which has two releases so far. How's it doing?
Doing real well, and the tour is helping the sales. Uncle Meat (The Film) (a Mothers Of Invention film that has been 20 years in the making) is just about to be released. What's holding that up right now is that Cal Schenkel is finishing the painting that's going to be used for the cover of the jacket.

In Video From Hell (a tape showing previews of all planned Honker releases, plus lots of other odds and ends), I was really glad to see the video for "You Are What You Is." Hardly anyone's seen that because of the "objectionable" things in there.
Well, there's a problem with giving the President of the United States the electric chair, isn't there?

Not when you consider who the president is.
We know who talks to us on television once in a while, but we don't know who the president is, and that's the real problem! Because it used to be Bill Casey, but he's dead, and then it was kind of Oliver North, but now he's unemployed, so who the f**k is doin' it? We know that the guy we see on TV is doin' nothing except taking a nap in the middle of the afternoon. Maybe it's Ed Meese. That would explain some of the ignorant policy decisions that are comin' out of there. That's right there in line with his average of brilliant decisions. In the news, when they were talking about Ronald Reagan and Ed Meese, the line was "almost brothers." Remember that one?

Well, let's get back to music and video. Video From Hell has a scene that had menu options like "sex," "violence," "drugs" etc. What is that program, and what does it do?
That was a joke program the engineer put together called "666 Youth Modification." It was a big PMRC joke about the record industry corrupting the youth of America. So we thought we would manifest it right there on the screen. Pick one classification: drugs, sex, violence etc. You hit a key, and it says, "Corrupt or enhance." As if you could really do that.

Have you played around with any DAT (Digital Audio Tape) machines at all?
The little portable ones? No.

Well, how do you feel about copycode and recording prevention legislation?
What one should remember about the copycode controversy is this: The copyright on the copycode chip belongs to CBS. In order to copycode anything, the chip must be bought from CBS and/or a royalty must be paid to CBS for the use of the code. So they have a vested interest. And if the United States passes into law the thing stating that things must be copycoded, that is legislation in the service of commerce, and it's one of the reasons why the record industry is allowing itself to play footsie with groups like the PMRC. This way their husbands can decide on things like copycode chips and provide millions of dollars in found money for major corporations.

Do you think that copycode legislation will pass?
I don't think so.

Since a lot of your back catalogue is resurfacing on Compact Disc, there's a lot of excitement among your fans that collect your music, and the new lease on life that CDs give to older recordings. Will there be any more releases this year, other than the 12-CD set You Can't Do That On Stage Anymore?
Well, there's the new album, called Guitar (The sequel to Shut Up 'n Play Yer Guitar (The Series)|The sequel to Shut Up 'n Play Yer Guitar). One of the next batch of old ones will be Absolutely Free, and I think we're gonna do One Size Fits All, but I don't know what the other ones are going to be.

You're playing guitar again on this tour. On at least, two occasions, you stopped playing guitar for a long period of time. Once was when you did nothing but orchestra stuff for two years, and the next time was when you were involved in all this PMRC stuff and the synclavier records. What makes you decide to stop playing the guitar, and what makes you decide to pick it up again?
The only time that I play is when I'm touring. When I'm at home I don't play it at all. So if I'm home between tours, that's usually a fairly short period of time if I'm touring a lot. So I pick it up when we go back into rehearsal.

I'm a businessman. I have to run a business when I'm home. There is no time for anything else except for running the business.

This is the first time that you've brought a horn section on tour in a long, longtime.
Not since 1972.

I once read in an interview that you don't use horn players more often because they didn't like playing harmony to a guitar player, and as a result that hurt their performance. How do you feel about this horn section now?
That's true, but unless you find the right guys ... That's a statement about horn players in general.

So right now you've got the right people.
I sure do. And basically what they're being asked to do is not to play chords, or harmony parts behind guitar solos. They play a little eight-bar figure that makes the transition between the body of the song and the guitar solo, that's not all that's required of them. The rest of the time they're playing really complicated parts that are challenging to them, so that keeps 'em on their toes. Other groups that go out with horn sections, their basic function is to play the little punches and pads and boop-boop-boops in between what the electric instruments are doing. That's not a very gratifying life for a horn player to just play a few notes and spend the rest of the night banging on Latin percussion instruments. We don't do that.

Are you recording every single show on the tour?
You betcha.

You stress that you are a businessman. I know that you are very successful (USA Today reported that in 1986 Zappa grossed over $1 million in mail order alone). How do you remain so successful in the world of pre-packaged, rigid formatted and marketed entertainment?
By not doing that. If I were to compete with the other people, who are doing freeze-dried formats, I'd be dead by now. I provide, as it says on the label, the "World's Finest Optional Entertainment."