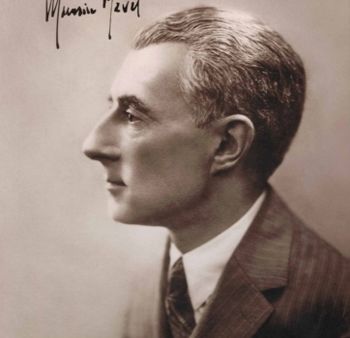 Often linked with his contemporary Claude Debussy he was influenced by Igor Stravinsky's work in Paris in the first decades of the 20th century. He studied under Gabriel Fauré at the Paris Conservatoire, and won recognition with his "Pavane pour une infante défunte" (1899, "Pavane for a Dead Princess"). He wrote several successful piano pieces, including "Rapsodie espagnole" (1908, "Spanish Rhapsody"), and the music for the Diaghilev ballet's performance of "Daphnis et Chloé" (first performed in 1912). After World War I, in which he saw active service, he toured, to great acclaim, in America where he admired jazz music; a style which would later influence some of his own compositions. His works included the "choreographic poem" "La Valse" (1920), the opera "L'Enfant et les sortilèges" (1925, "The Child and the Enchantments"), and "Boléro" (1928), intended as a miniature ballet.

Maurice Ravel is mentioned in the list of influences in the sleeve of Zappa's debut album Freak Out! (1966), under the heading: "These People Have Contributed Materially In Many Ways To Make Our Music What It Is. Please Do Not Hold It Against Them."

In 1989 Zappa selected Ravel's Piano Concerto in G in John McNally's Castaway's Choice as one of his ten favorite records to take to a deserted island.

In the late 1980s Zappa included a five minute cover of the 15-minute long Boléro by Ravel during concerts. He included a version on The Best Band You Never Heard In Your Life, although it had to be removed from European issues due to copyright problems.

Maurice Ravel is also mentioned and thanked in the liner notes of The MOFO Project/Object (2006) album. [1]

Den Simms: You had mentioned too, that you might release Maurice Ravel's 'Bolero' as a single, I suppose only in Europe, because of some copyright regulations here in the U.S.

Frank Zappa: Yeah, the only place in the world where the copyright has expired, and it's public domain in England. And so, if it's released and manufactured in England, then it could be done, and I've got an assembled mix of it. Sounds great. Maybe next year.

Den Simms: That was a wonderful arrangement. I really liked the little, oh, what was it, 'My Sharona', inside there.

Frank Zappa: See, you haven't even heard the way it was finally y'know, by the end of the European part of the tour, they really had it down, and they were playing it well. They weren't playing it that well in the U.S. cause we just started doing it within the last ten days of the U.S. tour, so it was still kind of a fresh arrangement. We played it all over Europe, and it was a major hit in the show.