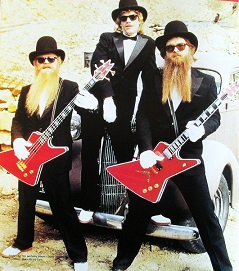 ZZ Top are an American rock band from Texas.

Mentioned during "Star Special", where FZ as a guest DJ on BBC Radio 1 in 1980 played Jesus Just Left Chicago.

Zappa especially admired ZZ Top guitarist Billy Gibbons: "Billy Gibbons is an original. The style that he does, although I know a lot of the blues antecedents that it was derived from, he goes like that [raises middle finger again]. You've gotta have that in your playing." - Zappa, interviewed in Zappa's Inferno (1987).