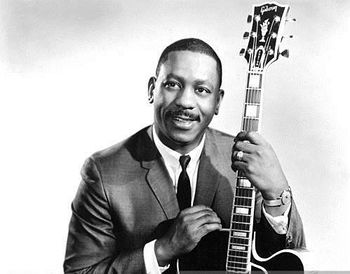 In My Favorite Records, an FZ penned article in Hit Parader (1967) Zappa says: "If you want to learn how to play guitar, listen to Wes Montgomery."

During the One Size Fits All Interview Zappa said: "And I always did like Wes Montgomery until they started smothering him with violins. I think his best album is one on Fantasy that just has him and his brothers playing "Lover Man" and "Monterey Blues"." During the interview Dynamo Frank, Zappa also named Wes Montgomery one of his favorite artists and "Lover Man" his favorite track by him.

Interviewer: Do you think the types of music that touch you are still "a direct extension of a personality of the men who played them."?

Zappa: "Well, I get the same sensation listening to Wes Montgomery. You hear Wes when you hear him play, and the same thing with Allan Holdsworth. He puts his personality, something about him as a person, into playing, and I don't detect "watch me show off now" – there is none of that syndrome. That's the thing that is most obnoxious about current guitar, because when people are attempting to play the guitar in a competitive way, in order to do somebody else's style but just do it faster, that's great from an Olympic competition kind of a standpoint, but I don't think it's particularly musical. And since I like music, it would not necessarily excite me to hear someone playing something real fast, if it wasn't unique to the individual." (FZ in Frank Zappa On... The '80s Guitar Clone)