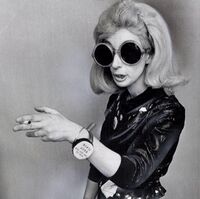 She is credited as "Fashion advisor" on We're Only In It For The Money.