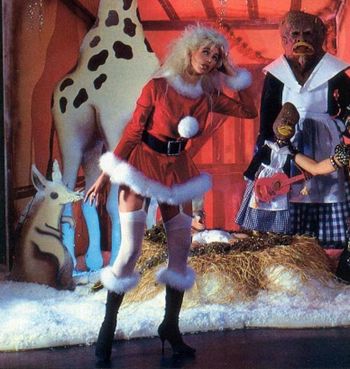 Annie Ample posing at the photoshoot for Thing-Fish for Hustler.

During the 1980s Ample was one of America's highest-paid strippers and appeared in several TV shows (Miami Vice, for instance) and films. She knew how to get publicity and in 1981 she got her first glimpse of notoriety when she walked alone topless at the French Riviera beaches during the Cannes Film Festival. She published her autobiography, "The Bare Facts: My Life As a Stripper" in 1988.

In 1992 Ample gave up the spotlight, changed her name, dyed her hair to it's original color and had her breast implants surgically removed. Ample suffered from multiple sclerosis and died of heart failure on New Year's Day, 2008. [1]

In her autobiography Ample reveals she worked with Frank Zappa in 1985 during a photoshoot for Thing-Fish, where she played Rhonda and Robert Axelrod took the part of Harry.[2]. Sergio Albonico was a photographer during this session.[3]

Annie Ample :"Frank Zappa's group, The Mothers of Invention, was one of the major groups in the 1960s. He'd concentrated on making and producing records right through the '70s rather than going on tour. He was one of those politically outraged musicians, who was also outrageous.

He picked me out of the Faces book that most performers are in if they have an agent. I was perfect to play a part in what was going to be his first big musical stage production. Before I went to LA, Frank and I spent hours on the phone talking. In fact, he auditioned me on the phone, and when we talked he always wanted me in character. I was supposed to be a domineering housewife with a horrible, high-pitched voice. "Harvey,[sic] yer a worm," I repeated over and over again when we were talking.

I went to Zappa's studio, which is in his basement, and is technically as good as any around. He showed me how he does the recording and the mixing right there. Then I met his wife and children. They all are terrific people. Zappa doesn't drink or do drugs. He proves that you can be in show business and have it all together.

Zappa decided that he first wanted me to do publicity for his new album, "Thing-Fish." In it, he had a song about a rubber doll. He'd heard about Slutty Suzy and Sluts Are Us in my act, and thought that Suzy and I would fit right into his plans. As part of the promotion, he was producing a celebrity layout for Hustler magazine. That was fine with me as long as I didn't have to do any acrobatic shots. It took three of the wildest days of photography I'd ever gone through. I was paid $2,000 a day. The magazine got twenty-one pages out of it. As usual, I was underpaid given the results.

My hair was white and ratted out about a foot around my head. I wore crazy-looking glasses, which had boxes with nude legs hanging out of them. They put a scar on my chest, and naturally I stripped through the pages of the magazine. I started out in a Santa Claus outfit and went slowly down to a pencil and a briefcase.

The set, like Zappa, was bizarre. They must have spent thousands of dollars on it. There was a house with phony snow and dozens of pink flamingos in front of it. In the background, there was a huge poster of Pat Boone with his penis hanging out. Someone had found a Polaroid and sold it to Larry Flynt, Hustler's publisher. Since he couldn't use it anywhere else, he used it here. Don't ask what the significance of any of this was. I was just doing my job.

I was wearing black leotards and a brown dress – very understated for me. The dining room was just as elaborate as the foyer. Around the dining room table sat an odd bunch of people. There was Tom Laughlin who starred in "Billy Jack", two Indians who were leaders of AIM (the American Indian Movement), Watergate figure John Dean, and the man who invented the Uzi machine gun. There was also a general and an evangelist.

The butlers were all wearing Uzi machine guns. I wasn't sure if this was decoration in honor of the inventor or because of the nature of the crowd. It was bizarre to say the least. No matter how delicious the food was, I felt extremely uncomfortable. The conversation was about developing a magazine that would compete with SoIdier of Fortune, the magazine for mercenaries.

Larry Flynt was in a wheelchair because he'd been shot and left a paraplegic. I'd been told that his bedroom was bomb-proof because he's worried that someone will try to kill him again. I didn't get a chance to talk to him until I went to the bathroom after dinner. I happened to walk in on him by mistake. There he was with a therapist, who was massaging his body to keep his circulation going. The bathroom was huge. When I tried backing out the door, he waved me to the edge of the bathtub to have a talk.

Unlike the standoffish Hefner, Flynt was friendly. He talked about his mother, who'd come from a small town. Because she didn't want to leave her house, he rebuilt it in his backyard out there in Hollywood so that she'd be near him.

Flynt was starting to run for president at this time. He told me a lot of things that I didn't want to hear. About tapes that could, he said, hurt several people in high places. He said he knew who shot him, and that it had been set up by people who were high up in the government. He said he knew that the KAL jet that had been shot down really was a spy plane. He said he had films of the shooting of John F. Kennedy.

"You're welcome to see these films. We're going to have a screening after dinner." I didn't want any part of any of it.

Flynt invited me to be part of his presidential campaign. He gave me buttons and a T-shirt. He wanted me to go on national television, he said, as his campaign promoter – topless. As far as his attorneys could find out, there was no law that said you couldn't do this.

I left as soon as dinner was over. I felt ill. I'm not political, and I certainly didn't want to get mixed up with these macho politicos. I was so nervous that when Flynt offered me a ride back to Las Vegas the next day, I said no thanks. Frank Zappa drove me out to the LA. airport, and I was still so upset that when I walked out to the airport, I had my shoes on the wrong feet."''