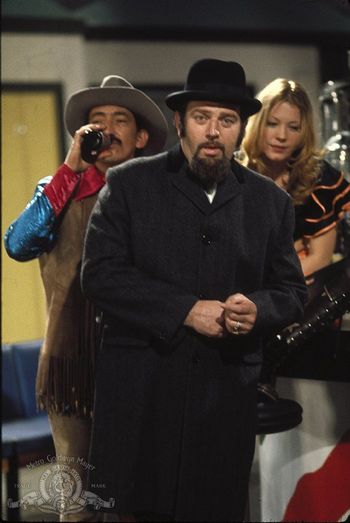 Theodore Bikel in 200 Motels. Behind him Jimmy Carl Black and an unidentified lady.

He made his film debut in The African Queen (1951) and was nominated for an Academy award for his role as the Southern Sheriff in The Defiant Ones (1958). Bikel also co-founded the Newport Folk Festival. As a theatrical actor he was best known for performing Tevye in Fiddler on the Roof. Among his best known film roles are Zoltan Karpathy the language expert in My Fair Lady (1964). Throughout his career he was also a noted civil rights activist and supporter of progressive causes. In 2005 he received a star at the Hollywood Walk Of Fame.

Bikel played the role of Rance Muhammitz (aka The Devil) in Zappa's film 200 Motels (1971). At that time, both he and Zappa had Herb Cohen as manager. Bikel can be heard talking and singing during the tracks Semi-Fraudulent/Direct-From-Hollywood Overture and Strictly Genteel. He also appears in the documentary Frank Zappa Filmt 200 Motels.