The Speakeasy was a Boston 'blues bar' located in Norfolk Street, Cambridge, Massachusetts. The venue was divided lengthwise, with the bar and dance floor on one side, with booths & tables and stage on the other. Bands hauled in their own PA systems, but the bar did have a pinball machine, hot dog steamer, popcorn machine and a jukebox stocked with rare blues 45s. Monday nights were known as "Blue Lodge" nights, hosted by Steve 'T-Blade' Berkowitz. 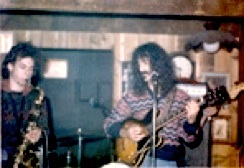 One Monday, Zappa, accompanied by Captain Beefheart and drummer Aynsley Dunbar, jammed in the bar - on borrowed equipment - along with the club's sax-player Dave Birkin [date uncomfirmed].

The Speakeasy, Boston, was knocked down in 1980 to create a parking lot.