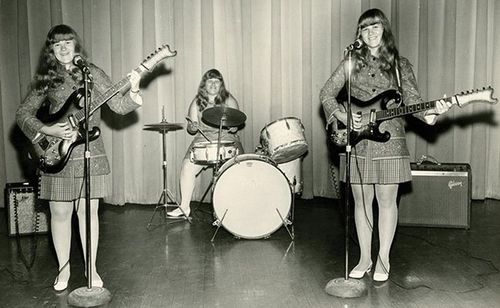 The Shaggs (1969-1976) were an American girl group and rock band featuring three teenage sisters (Dorothy Wiggin, Betty Wiggin (vocals, guitar); Helen Wiggin (drums); additional personnel: Rachel Wiggin (bass) who were forced by their naïve father to form a pop group in order to become "rich and famous". They recorded one album together: Philosophy Of The World, which barely sold.

The girls were unable to sing, nor could play their instruments properly. People went to their concerts to laugh at them, but later they became a cult group. Even though the Shaggs had no musical talent their songs had a unique and interesting sound which ignored all sense of musical harmony and melody. The girl's lyrics were charming simple minded songs about typical teenage girl subjects. Due to their amateurish music Irwin Chusid named them as one of the first outsider rock artists, together with Wild Man Fischer and Captain Beefheart.

Zappa and The Shaggs

Zappa described the Shaggs as being "better than the Beatles - even today." and named Philosophy Of The World (1969) his third favourite album. As a guest DJ on Dr. Demento in December 1973 he played two songs by the band: My Pal Foot Foot and It's Halloween.