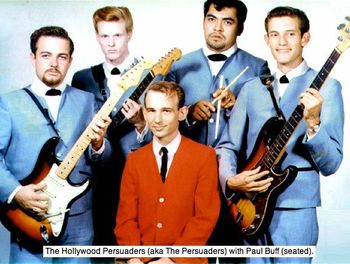 The Hollywood Persuaders and Paul Buff.

The Hollywood Persuaders were a U.S. rock band, produced by Paul Buff (who actually played all instruments). A few tracks were released under their name: Tijuana Surf and Grunion Run (1963), Persuasion and Juarez (1964) and two albums, Drums A-Go-Go (1965) and Los Persuaders (1965). As Buff's Pal Studio in Cucamonga was eventually taken over by Frank Zappa to become Studio Z, Zappa became more involved with the musicians recording there. [1] Buff asked Zappa to write a B-side to the band's single Tijuana Surf, which became Grunion Run. [2] Tijuana Surf was a number one-hit song in Mexico at the time. Thanks to the royalties on this song, Buff was able to bail Zappa out of jail in March 1965 after he was arrested. [3]

One of the constellations on the star map on the back cover of the One Size Fits All (1975) album is called Grunion, a nod to Grunion Run.