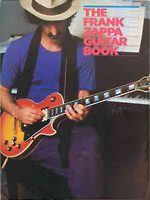 Introduction by Steve Vai
The works in this book were transcribed between January, 1979, and August, 1981, whenever I wasn't touring with Frank.

The songs were first taken off the album and put onto cassettes. The songs from Joe's Garage were transcribed off a small Sony tape machine. The stuff from the guitar albums were bounced to a four-track tape deck, and some were done at half speed.
The guitar solos from Joe's Garage (except "Watermelon In Easter Hay") were solo tracks that were taken from different live concerts through the years and printed on studio rhythm tracks. the rest are live recordings from Shut Up 'n Play Your Guitar [sic] albums and others.
If you're into this kind of reading it might be a good idea to study them piece by piece. This may encourage you to transcribe on your own which is good for your ears, reading, soloing, and psychiatrist. It may be a good idea to start on a simpler tune. Let's face it, this isn't "Sight Reading 1."
Some of the rhythmic notation may seem ambiguous. On a few licks, where there qare several ways to write them, I chose the way which accents the phrasing.
The "Theme From The Third Movement Of Sinister Footwear" (formerly titled "Persona Non Grata") appears on the album You Are What You Is. On that track Frank's guitar line was doubled by electric guitar, percussion, and bass clarinet. The original rhythm track was replaced by what you hear on the album.
Best luck to the musicians who appreciate and can benefit by these publishings. Just don't hurt yourself.
If you have questions on some of this stuff, write me Steve Vai, c/o Glotzer Management, 7220 Sunset Boulevard, Los Angeles, California 90046.

Steve Transcriber Vai
Steve Vai (who was six years old on 6/6/66) grew up on Long Island. He went to school in Carle Place, New York, and studied with William Westcott. He studied guitar with Joe Satriani, and, while in high school was a member of various rock bands, including Ryge. Later he attended the Berklee School of Music in Boston. While there, he sent Frank transcriptions of "The Black Page" and "Black Napkins," and a tape of his playing. He then moved to California and joined the Frank Zappa Band in 1979. His duties included playing impossible guitar parts and more transcribing.
Besides playing and transcribing, Steve enjoys producing when he gets a chance. But when asked why would somebody want to write down this stuff, he replied, "it's probably a mental deformity from birth." Steve grieves with people who try to play this stuff, "I'm not the only two, I used to cut the grass, you know, you know?"

The Copyists
The music in this book was hand copied. This process of "Musical Calligraphy" requires a unique blend of musical talent and drafting ability. It is done with many different pens, various templates, and much patience. The four musicians listed here all copied some of the music in The Frank Zappa Guitar Book.
David Ocker has copied and orchestrated various music for Frank Zappa since 1977. He also performed clarinet and bass clarinet on Frank's Sheik Yerbouti and You Are What You Is albums, and the solo clarinet part in the first movemnet of "Mo 'n Herb's Vacation" was written for him. Also a composer, Ocker is a founding member of the Independent Composers Association, a cooperative presenting organization for new music.
Richard Emmet has accepted the increasing loss of eyesight and hearing as the price accompanying the awesome responsibility for copying and transcribing the music of Frank Zappa, for whom he has worked since 1978. In real life, Mr. Emmet is a composer (and a closet mystic).
Arthur Jarvinen holds a Bachelor of Music in applied percussion (Ohio University) and a master of Fine Arts in percussion and composition (California Institute of the Arts). His compositions for solo instruments and various small ensembles are heard often in the Los Angeles area. He performs most frequently with The Antenna Repairmen, a percussion/intermedia trio. He also gives solo performances of his physical poetry.
Lee Scott was born in Atlanta, Georgia in 1956. He received a Bachelor of Fine Arts degree in composition from the University of Georgia and a Master of Fine Arts from the California Institute of the Arts. He now works on numerous electronic music projects.

A Few Words For Those Who Managed To Get This Far ... by Frank Zappa
In preparing this book, we have tried to present the rhythmic and melodic events as exactly as possible (including my mistakes ... let's face it, some of those notes got played by a finger landing on the wrong fret or because I was rushing the tempo, or trying to catch up to a band that was running amok ...), and for the most part, I think we have succeded.
If the notational results sometimes appear to be a little terrifying, you can console yourself with the thought that only a maniac would attempt to play these things anyway ... BUT, if you should be a maniac sort of a person, AND, if you should try to read these charts on your own instrument, please be advised that if I were standing next to you with a metronome and a baton (frowning and smoking a lot of cigarettes), I would insist that the rhythms be accurate, and that only the pitches which reside outside the basic tonality (the original "wrong notes") could be altered.
We hope you enjoy this book, and we look forward to providing other study items like this in the future. Thank you for taking the time to read this.