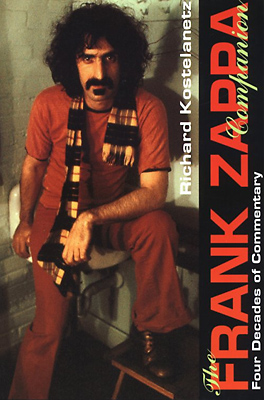 The book is a collection of various articles, reviews, interviews with and about Frank Zappa, including the full text of his testimony during the PMRC hearings.

You Can't Do That On Stage Anymore
The '60s produced many creative new musicians, but none was more inspirational, controversional, scatological, or creative than Frank Zappa. Beginning with his band, The Mothers of Invention, Zappa created music in a wide range of styles, from tape montage to light jazz to heavy metal rock to lovingly recreated doo-wop to satirical operas ... all in his own unique style. Zappa was an agent provocateur – always pushing the envelope, amazing his fans while infuriating his critics. This book collects articles, reviews, interviews, and the full text of Zappa's famous testimony against labeling records before the United States Senate. It is a must for fan and foe alike!

The editor:
Richard Kostelanetz has been writing about rock and roll since 1968. He is the author of more than forty books on music and the avant-garde, and has edited The B.B. King Companion for Schirmer Books.