Society Pages was the title given to two separate series of fan magazines, devoted to the activities of Frank Zappa.

The expression Society Pages is generally employed as a reference to glossy magazine or press coverage of celebrity activity, often in a critical fashion, taking the form of a social diary of "who's wearing what, or doing what, and where and to whom". A theme touched upon by FZ in the eponymous track on the album You Are What You Is, released September 1981.

The Norwegian 'Society Pages' FZ Fan Magazine:
The first series of Society Pages magazine was published in Oslo, Norway by the "Frank Zappa Society". Its first issue appeared in October 1980, and the last - in the set of 48 - appeared in December 1989. A 5th Anniversary supplement, entitled "The Big Note - A Concise Guide To The Legend Of Frank Zappa" was issued along with the magazine in the fall of 1985. A further publication "The Big Note - User's Quick Reference" appeared in 1992. 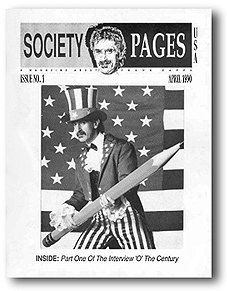 The American 'Society Pages' FZ Fan Magazine:
The second series of Society Pages magazine was published in America by the International "Frank Zappa Society". Its first issue appeared in April 1990, and the last - in the set of 12 - appeared in March 1994 as a memorial "Special Photo Issue". One of the frequent contributors was Andrew Greenaway.


Society Pages is a forum for Frank Zappa fans to discuss, review, reflect and analyze Frank Zappa's words, music, thoughts and activities. Society Pages is not intended to be an alternative to the real thing. We urge you to call the official Zappa hotline – (818) PUMPKIN for all the latest and accurate, up to the minute, official Zappa information. Or you can write to them at PO Box 5418 North Hollywood, California 91616-5418.

Society Pages is published by Falcum Publishing, which is owned by Zolar Czakl, Inc., a division of Monster Magnet Enterprises in assbay Corporation, which is a solely owned subsidiary of Po-jama People Communications, and in cooperation with Cheepnis Industries and affiliated with the Latex Solar Beef Group and with the expresses permission of Big Swifty and Associates-trendmongers, the Dwarf Nebula Resource Center, and some dork named Ralph.