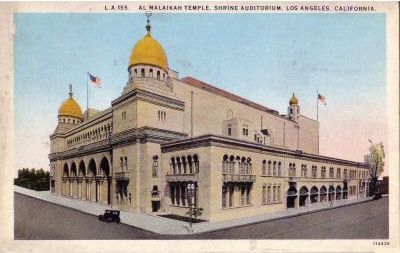 An early postcard of the Shrine Auditorium

The Shrine Auditorium is a landmark large-event venue in Los Angeles, California, USA. It is also the headquarters of the Al Malaikah Temple, a division of the Shriners.

Opened in 1926, the current Shrine Auditorium replaced an earlier 1906 Al Malaikah Temple which had been destroyed by a fire on January 11, 1920. The new auditorium was designed by San Francisco-based theater architect G. Albert Lansburgh, with local architects John C. Austin and A. M. Edelman associated.

When Zappa was the drummer of The Blackouts he performed in the Shrine Exposition Hall for a NAACP benefit. According to an interview called Zappa, 79/8 Zappa considered it: "the biggest gig we ever had": "(...) we were the warm-up act to Earl Bostic. The people weren't dancing to Earl Bostic for some reason, so he hung it up, and we went back out there and played. Everybody was jumping all over the place."

Zappa performed there with the Mothers a few times in 1966: on September 17 and on August 13 . In May 10-11, 1968 they played another concert there. According to The Real Frank Zappa Book he used John Judnich's hi-fidelity sound system to perform there. In the One Size Fits All Interview (1977) Zappa mentions that Eric Clapton once performed with them there:

Interviewer: How did Eric Clapton come to appear on We're Only In It For The Money?
Zappa: I met him someplace in New York; I can't remember where, maybe at one of our concerts. He played with the Mothers once at the Shrine in Los Angeles and came over to my house, but I haven't been on speaking terms with him for some time now. He was just in New York one day hanging out, so I invited him over to the studio to do the rap that's on "We're Only In It For The Money". People think he's playing on it, but he's not; the only thing he's doing on there is talking.

Another mainstay in Zappa's personal circle of friends whom he met at the Shrine was Pamela Des Barres. In the 1994 interview Frank Zappa, Musician Des Barres told the interviewer: "I first met Frank at the Shrine Auditorium in Los Angeles for a big '60s freak-out scene with the Mothers and all these other bands. I was just mesmerized. Frank wore these bellbottoms with flowers all over them. He was always poking fun at whatever was happening, and he continued to do that right to the end. He was wandering around after the show and I made a point of slamming into him on the dance floor."

The Mothers' concerts at the Shrine were also reviewed by Stan Bernstein on August 13, 1966: The Mothers Find A Way To Bore Nearly Everyone.

Concert footage of Zappa at the Shrine in 1966 can be seen in the documentary You Are What You Eat (1968).

The location is described in Zappa's text Freak Out! Hot Spots and placed at #12, with the description: "it used to be the best place to go to meet friends and dig the juke box until the heat blew it for us... or was it that bunch of outside idiots that started hanging around towards the end there, unable to maintain their coolness? The ruins are located at 8537 Sunset Blvd."

The Shrine Auditorium is mentioned by Wayne Lyles during the track The Blackouts, which opens Zappa's album The Lost Episodes.

Wikipedia article about the Shrine Auditorium