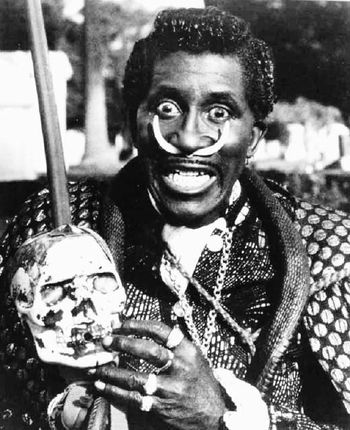 Screamin' Jay Hawkins (18 July 1929 - 12 February 2000) was an American blues/rock 'n' roll singer and pianist. He is best known for his theatrical performances while he sang. Hawkins dressed up in leopard skins, red leather, wild hats, capes, rubber snakes and used voodoo doll imagery. He often sang in a loud, howling, grunting voice. At the time his performance scared quite a few audiences, which is why Hawkins is sometimes coined the first shock rocker in music history.

In 1968, as a guest DJ on KPPC, Pasadena Zappa played Hawkins' "I Put A Spell On You". Also note that much of Hawkins' horror antics were later imitated by Alice Cooper, whom Zappa produced.