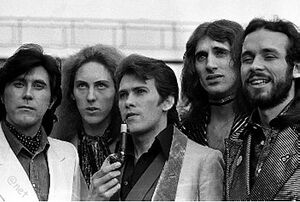 Roxy Music was a British rock group, active in the 1970s, best known as the band who spawned the solo careers of Bryan Ferry and Brian Eno. They represented the intersection of progressive and glam rock.

They opened for Zappa at the Mecca Auditorium, Milwaukee in November 1975. Zappa then asked band member Eddie Jobson to play guest violin in Hamilton, and Montreal - all the while playing with FZ in dressing rooms and hotels as Frank assessed his talents. From 1976 to 1977 Jobson became a member of the Mothers. He appeared on the cover of Zoot Allures though he didn't play a note on it. He did however perform on Zappa In New York, Studio Tan, Shut Up 'n Play Yer Guitar, You Can't Do That On Stage Anymore Vol. 6, Läther, Conceptual Continuity and An Evening In Detroit.

"When Hot Rats came out that really showed the depths of his musicality and guitar playing, because it works on so many different levels. The Mothers Of Invention and Zappa, the ideas behind it. It summed up what was best about the whole period: the depth of music, the presentation side of music, the fun, the great fun side of music, the outrageous side of music,.. It just had so many different elements, which to me, at the time sixteen seventeen year old, were just so advanced and, of course, he had all that knowledge. Zappa, Varèse, okay, let's listen to Varèse and see what that's all about? It's a very, very wide musical influence right? You listen to all these different things. It's not just rock music, it's classical music, musique concrète, avant garde music, it's Charles Ives, all these disparate elements and learn that from Zappa and his attitude. It's incredibly important. He was a hero."