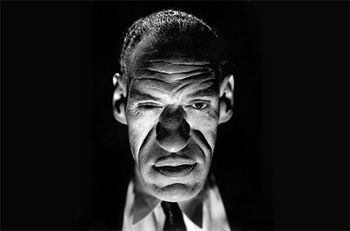 Rondo Hatton (April 22, 1894 - February 2, 1946) was an American character actor who often played tough guys or villains in many Hollywood B-movies. He was known for his brutish facial features which were the result of acromegaly, a disorder of the pituitary gland.

During the 1970s Zappa sometimes introduced himself on stage as Rondo Hatton. One Zappa bootleg is called "The Rondo Hatton Band" and can be heard as Side 5 of the Mystery Box and Beat The Boots III - Disc Five.

Den Simms: "OK. Who is Rondo Hatton? You've introduced yourself as Rondo."

Frank Zappa: "Rondo Hatton was a character actor from the old movies who had a disease called acromegaly."

Den Simms: "I never heard of that one."

Frank Zappa: "That's right. He had a real big and grotesque head, and he was a character actor in some horror movies in the old days."

Den Simms: "Um-hm ... so why would you introduce yourself as him?"

Frank Zappa: "Why not?" [laughter]

Frank Zappa: "I don't know what the movie was. He was one of these ... at one period in American film history, he was the classic ugly guy. Somebody had to carry on the tradition.""