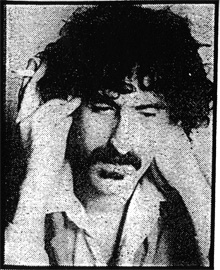 Frank Zappa's return to the UK is now confirmed for June when he'll play two London concerts, and these will be his first appearance here for over two years. They are at the Hammersmith Odeon on June 18 and 19, and tickets are available now from the box-office and usual agents, priced £6.50, £5.50 and £4.50.

Zappa is currently working on a new album, which will be released in late May or early June on the Barking Pumpkin label through CBS.