Music On The Desert Road

"For years I had something called "Music On The Desert Road", which was an album with all kinds of different ethnic music from the Middle East. I used to listen to that all the time." - FZ in "Frank Zappa, Unholy Mother", an interview with "Guitarist Magazine" (June 1993).

Music On The Desert Road: a sound travelogue (Angel Records, Ang 35515, 1956) is a 1956 music album, compiled by "ethnomusicologist" Deben Bhattacharya. 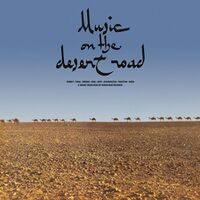 “The music on this record represents selected pieces from a collection of over forty hours of recording made during an overland journey to India. The journey started from London in the middle of August, 1955, and ended in Paris by the following March. The rate of progress was fairly slow and my plans flexible in order to cope with the caprices and spirit of the musicians whose greatness lies in their skill in improrvising within traditional themes. In every country though which I passed, I found a living tradition of folk music, each folk musician leaving his individual mark upon the music of the country. These continuous but small additions and alterations are the natural spirit and life of folk song and music. Rigid laws and revivalism seem to push it towards artificiality and destruction.”

3. "Rasd", song in praise of the prophet, recorded during the evening service of the Dervishes.(1′59)

5. Bedouin coffe grinding, recorded in a Bedouin camp eight kilometers away from the Jordan frontier.(1′51)

6. "Kasam-e-Meru", a section from a Kurdish ballad accompanied by rattling spoons. (2′17)

1. On a pair of Zarb drums, a drummer imitates the rhythm of a train. The whistle is produced by the mouth. (1′29)

2. "Humayun". Modern orchestration of the traditional Persian mode Humayun, using mixed instruments - both European and Persian - such as accordion, two violins, rattle, two Tars, Santur and Zarb drum. The present recording is only the instrumental prelude in the key of F minor, to a series of love songs in Humayun mode which continues for twenty minutes. (2′06)

6. Temple bells and drums from a Bengali Kali temple in Bombay, India (5′32)