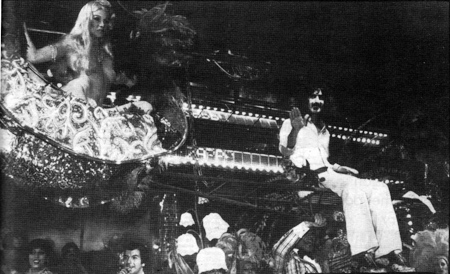 Allan Jones reports on a weird and wonderful two-day jaunt in Paris with the Mothers ...

Jeez, Zappa looks so peeved it makes you wince. He lays a really morose stare on the sound crew. One of his specials, reserved for unfortunate individuals who don't quite measure up to the moment, designed to reduce those individuals to total insignificance and cause them to wish they were well out of the line of fire.

An FZ eyeball wipes out. He turns his attention to the equipment mounting up around him, screws up his face and rips off a riff on his guitar that would make James Williamson blink at the violence of its delivery.

Francis Vincent Zappa performs the collected works of the Stooges, already. He stops suddenly: "Listen, can you reverse the polarity on the console?"

If you can imagine a Buckminster Fuller dome-apparition superimposed over a building similar, if slightly smaller, to the Empire Pool then you've almost nailed down a picture of the Palais des Sports de Paris.

Both have an equal sense of oppressive monotony in terms of space and size. The Palais des Sports seems more adequate for a Presidential convention than a rock concert, but its capacity and the economics of rock have led to its utilisation as a venue for concerts.

Tonight it's the scene for Zappa and the Mothers' first French date of their current European tour. A "Concert Unique" as the posters for the show would have it.

Outside the hall, 300 gendarmes, unarmed but with truncheons and batons at the ready, mix uneasily with free music aficionado militants.

Herb Cohen, Zappa's manager recalls that the last rock concert held at the hall precipitated a riot which the hundred police who were on duty could not contain. The hall was severely trashed.

Tonight, therefore, the police force has been trebled, and look as if they wouldn't suffer a moment's hesitation, at the first sign of any trouble, to wade in and crack open a few dozen heads.

If things outside are a little unsettled, the situation inside the Palais des Sports is just the right side of chaotic. The Mothers' sound system should have arrived earlier in the afternoon after making the long road haul from the previous gig in Gothenburg.

The whole system should have been erected, and the sound check completed by 5 p.m, at the latest.

The trucks carrying the equipment were, however, held up at the customs, and delayed at a ferry, and finally arrived hours behind schedule. It's a situation that's occurred twice before, explains Zappa later. It certainly does little for maintaining even tempers.

To avoid any potential rioting, the audience are allowed in during the sound check, instead of being kept waiting, with their patience slipping away, while the check is being completed.

None of the tickets are numbered, and with a sell out audience, and a seating capacity of around 5,000, that means a God almighty race for the best seats.

As soon as the doors open a phalanx of French music lovers sweeps down the aisles, trampling over seats in a demented tide. It gets crazier by the minute, as hundreds more pile in.

It's a surprisingly young audience. Half of them look as if they've just crept in after a three day sprawl in some field listening to Status Quo beating a two chord riff to death. The rest look like roadies for Hawkwind, or some long forgotten French band of hippies.

The hall is transformed, with their appearance, into some surreal timewarp of gigantic proportions. It's like '67 all over again. And there's even a few dozen in kaftans and headbands.

The slumbering underground of Paris waking again to check out Zappa. They seem genuinely bemused at the sight of Zappa, greeting them with a deadpan "Bonjour," as they fight for their seats.

There's an absurd amount of dope of all description, floating around. As soon as they're settled in their seats the kids get down to the serious business of getting as wrecked as it's possible to get without passing into a coma. Breathing in without suffering an OD becomes an occupational hazard.

The French security men don't seem at all concerned. Their instructions would seem to have been to guard Zappa at all costs.

Onstage Zappa and the Mothers are still running the sound check, and tuning up. They play a few bars of a song, with FZ still looking concerned about levels and polarities.

The kids are still crawling into the six foot aisle between the front row seats and the barriers, waving and shouting to Zappa and ze Mothurz. "OK, folks," says Frank, "we'll be back in a little while. Just as soon as they fix the lights."

It's been ten years now, since the first incarnation of The Mothers of Invention, Frank Zappa's "mutating musical telephone to the world." Ten years, eighteen albums and a movie.

To celebrate the anniversary Zappa toured the States earlier this year with a couple of the original band augmenting the line up, and performed selections from the earlier albums. In Paris it was decided to hold an intimate party in a secluded Left Bank nightspot, The Alcazar.

Maybe intimate is an inappropriate term. The whole shebang cost around thirty grand, much to the alarm of the Warner's office in Burbank who tried unsuccessfully to put the finger on the event.

With a guest list of five hundred people and an epic cabaret, perhaps the only word is extravaganza. We arrived at The Alcazar, after a brief skirmish with a hotel, where a particularly offensive official almost got taken out and stomped by a leather clad journalist.

There are few words one can use to describe the sheer spectacle, the epic magnitude, the savage splendour of the Alcazar Cabaret.

There must have been thirty or more people flying on, off, and across stage on trapeze, swinging ropes, escalator devices running down from both sides of the proscenium arch.

I was praying that Stephen wouldn't wanna jam with the house-band ("Move over buddy. I'm gonna play me some drums here.") The half naked lady on the trapeze came damn close to kicking him in the back of the head at one point.

Neon lights flickered, "Welcome ZAPPA." The compere, looking like Sacha Distel, hijacked from St Tropez and zoomed into some degenerate nightmare, echoed the sentiment: "We welcome Monsieur Zappur and ze Mothurz of Eenvention," we sure do.

Herb Cohen was later full of enthusiasm for the show. Zappa didn't like the food or the wine. The service wasn't too hot because most of the waiters spent most of their time running on and off stage being Extremely Silly. It's impossible to recall in any detail the events of the show. Scenes, showstopping scenarios, and a cast of thousands sleeked by at near subliminal speed.

Tapes looped and drag queens dragged. Any element of satire was lost in the language barrier, but the natives around us exchanged knowing smiles as a naked chick in a bubble bath writhed seductively, overlooked by slide projections of (I think) members of the government.

The whole mazimbo got crazier by the moment. Zappa contributed a neatly executed impromptu tango ... (Pleez, Stephen, sit this one out).

A Mae West parody of "Great Balls of Fire," directed to an enormous spade muscleman who, bumped and ground effectively, was one of the more obviously amusing highspots.

An enormous re-creation of a Lautrec Moulin Rouge vision blazed on complete with a Can-can routine, and drew ecstatic applause from the French connoisseurs of neo-decadent cabaret.

The climax is a real bazooka. Cecil B. de Mille meets Fellini in a head-on crash at a hundred miles an hour, with choreography by Busby Berkley, out of his brain on bad acid.

Chicks fly across stage, the escalators deliver the cast onstage, like demented conveyor belts churning out freaks at a Crazy Factory.

Half moons, resplendant with semi-naked women descend From The Sky Above Our Heads. Zappa gets conned into joining in: "Herb did it."

He introduces the Mothurz. All except Ruth Underwood, who's got her feet up in a washbasin or sumfink. He's hoisted to a dangerous height above the stage as the stage machinery cranks away and the night explodes into tiny pieces ... Thirty thousand sails away ... drifts away.

The kid sitting next to me at the Palais des Sports looks as if he's just ripped off an expensive mixing console from the most advanced recording studio in Paris.

No ill-concealed cassettes for this guy. Bring the whole damn works along and bootleg the gig in real style. Most bands don't record their first album on a machine like that.

The balance certainly ain't too right onstage. "Is somebody stepping on the cables back there?" snaps FZ, as the Mothers anxiously check their equipment.

For those of you into Fine Details, the Mothers for this tour at least, are: "Ruth Underwood – percussion; Tom Fowler – bass; George Duke – keyboards and vocals; Chester Thompson – drums; [Napoleon Murphy Brock] – tenor sax, flute and lead vocals, and FZ – lead guitar, monologues and sneer."

It's a strange performance, veering from the irrational brilliance of "Approximate" to the unparalleled tedium of the closing blues encore. In between the extremes we have cereberal cadenzas and light entertainment.

Much of the latter from the extraordinary Napoleon M. Brock who looks disconcertingly like Arthur Lee at times. He spends a lot of his time engaged in either startling sax/guitar and vocal dialogues with Zappa, and running in ever decreasing circles around the enormous stage.

For most of the concert, FZ and the band seem to coast along, fixated by their own ability and dexterity at switching from difficult time signatures. Zappa's recent songs seem at times little more than brilliant exercises in complete triviality.

"Montana," "Penguin In Bondage" and "Stink-Foot" are conceptual formulisations on the same theme. Zappa monologue, musical interuption from band, Zappa solo, and back into monologue. When Frank Gets A Solo, which is pretty often, the rest of the band faze out a little, giving him all the time, he needs to wrench whatever sounds he wants to from his guitar.

He's a nonchalant and articulate guitarist, but with the present line-up there's little for him to feed off. He really needs the extra weight of the horn section featured on the "Roxy & Elsewhere" album which add more colour to the actual music.

Zappa's control over the musicians seems total. Ideally I'm sure he'd like to be playing everything himself, as well as mixing the sound and operating the lights.

So much of the humour that comes over seems forced and stylised. He takes an almost conservative delight in the relatively obscene "Dinah-Moe Humm."

God only knows what the French kids made of it all, especially George Duke's solo, which consisted for the most part of a long rambling rap – "Can you play an instrument now, George?", and the "Dummy Up" tail end dialogue to "Pygmy Twylyte." C'est insane ... "Merci beaucoup, mes amis. And goodnight."

Backstage Zappa is slouched down against a wall and appears to be on the edge of a total collapse. He signs a T shirt for some kid ... F. ZAPPA.

When a question is raised, and someone mentions they are planning an extensive analysis of FZ's "output macrostructure" the only reply is a stare – another good one – and a curt "You don't know nuthin'."

My God, what a bitter, twisted, cynical, sarcastic human being. Just think that once there was a spark of humanity alive in this body now twisted beyond repair by abuse, critical attacks in gossip columns, scathing album reviews in fashion magazines and women's wear weeklies.

Perhaps he'd have been better off playing bicycle wheels on the Steve Allen chat show on Channel Five.