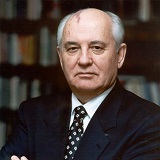 Mikhail Gorbachev (1931) was leader of the Soviet Union (which included Russia back then) between 1985 and 1991. His policies of glasnost ("openness") and perestroika ("restructuring") were instrumental in reforming the U.S.S.R. and changing its ties with the United States for the better. He is seen as one man who ended the Cold War. He received the Nobel Peace Prize in 1990. In 1991 the Soviet Union was dissolved, so Gorbachev abdicated as head of state. [1] This made him and Nikita Khrushchev the only Soviet rulers not to die in office.

'"Mr. Gorbachev has apparently stumbled onto one of the best-kept secrets in recent Soviet history: Communism doesn't work. It's against a basic law of nature: "PEOPLE WANT TO OWN STUFF." Perestroika virtually certifies this as an axiom. You still want to call it "Communism"? Sure -- g'head -- call it what you want. We don't need to say, "I told you so." Leave a guy some dignity. The Cold War? Have another Pepsi -- it makes you moonwalk".
- Frank Zappa, The Real Frank Zappa Book.

Den Simms: That's certainly the impression you get from CNN, and everything else, television, newspapers, and such like that. It sounds more optimistic than it did, say, midway through the Reagan era.

Frank Zappa: "Oh, that's for sure, but they don't have any choice, because it's just too obvious that things are changing ever [a] there. But you still get the whiff, especially on CNN, that they wish the Cold War was still going on, and CNN broadcasts a lot of stuff that says Gorbachev is not going to last, and we shouldn't trust him, and you hear that stuff all the time. All the time, and I'm not convinced that that's correct."

Den Simms: I kind of wonder about that myself. I have a friend who, although I love him a lot, his politics are completely in opposition to mine. He's a very staunch arch-conservative, and that's what I keep hearing from him. He says, "Gorbachev will never last. The guy'll never last. They're gonna have him out of there." I just wonder ...

Frank Zappa: "Well, just look at the facts. Even if he's out of there, he has had his impact. If they take him away, that ain't gonna change what's happening in the rest of the Warsaw Pact."
They're Doing the Interview of the Century, Part 2, June 1990.

We were wondering what motivated you to want to interact with people in Eastern Europe ... who you want to interact with, and for what purpose? Frank Zappa: "When I went to the Soviet Union for the first time around last February, I was curious to find out how true or false everything I knew about the Russians was, from the impressions that I received from the US media. So that's how I got into it. It turned out that I really liked the people. They're in a lot of trouble, obviously because their system doesn't work. I would like to help them out."

Have you got any ideas of how to do that? Frank Zappa: "One thing that they need is technical information on how business works because remember, for seventy years, it was taboo over there. Now Gorbachev says, "Go do business," and nobody knows how to do it. They don't even know the words. It's hard to discuss business with them because they don't even have the words in their vocabulary, like capital gains and stuff like that. (...) One of the problems that Gorbachev has is the way the Party congress is put together. There's more representation for the Slavic types than there is for the ethnic types in the outlying republics. It's a very diverse culture over there and I don't see how they managed to hold the Soviet Union together this long, let alone how they can hold it together into the future with the forces that are trying to pull it apart. All the Muslim-based cultures in the southern part of the country are being wooed by Iran. They've got Iranian revolutionary fundamentalist types and they're trying to stir things up all the time. You have a rebirth of interest in the Orthodox religion. But I wouldn't trust that church. They've all got an axe to grind. You couple this with the ambitions of Boris Yeltsin, a man who in his speeches, never talks about freedom, only talks about equality. He talks about that kind of equality that I just described to you where the mighty are treated downward and everybody else, they all stay at the bottom of the sludge. And now he is the president of the Russian republic and they've taken the first step toward secession. It's not-going to be an easy thing to deal with over there as long as the U.S. media keeps trying to make it look like Gorbachev is on his way out. If they get their wish and he does go out, you're going to be internationally in pretty bad shape because Yeltsin is not the kind of international diplomat that Gorbachev is."
Zappa!, Summer 1990.