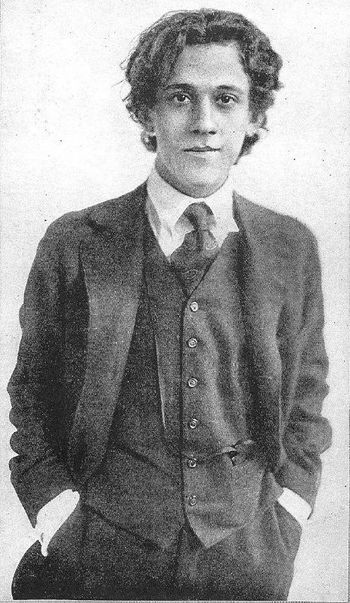 Leo Ornstein (11 December 1895 - 24 February 2002) was an Ukrainian-American composer and pianist. A child prodigy, he came to the United States with his family in 1907. He gained fame in the 1910s and 1920s as a brilliant pianist and avant-garde composer. Yet in the early 1930s he pulled back from his public life and sank into obscurity for decades. All this time he kept writing music, though, while teaching at his own school, the Ornstein School of Music in Philadelphia.

Frank Zappa mentioned Leo Ornstein in his list of influences in the sleeve of his debut album Freak Out!, under the title: These People Have Contributed Materially in Many Ways to Make Our Music What it is. Please Do Not Hold it Against them."

"There were a couple of people who were vying for the title of "Bad Boy of Music" during that period. The other guy was Leo Ornstein, who was a composer who wrote piano music, some of which was to be played with a two-by-four. One of his pieces was called "Wild Men's Dance." You couldn't play the chords with your fingers, you needed a 2-by-4. You can imagine a guy in a tuxedo in Carnegie Hall going DUN DUN DUN DUN DUN – "This is 'Wild Men's Dance'! I'm the Bad Boy of Music! DUN DUN!" - Frank Zappa, quoted from The Mother Of All Interviews (Part 2).