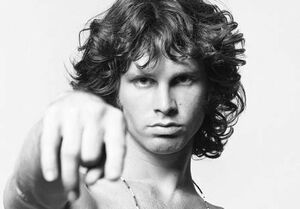 James Douglas "Jim" Morrison (December 8, 1943, Melbourne, Florida - July 3, 1971, Paris, France) was an American rock singer, poet and director best known as the lead singer for The Doors. Their hits included, "Light My Fire", "People Are Strange" ,"Hello, I Love You" and "L.A. Woman".

"Well, I knew Jim Morrison too. As a matter of fact, my wife knew Jim Morrison when she was a child. They used to play together. In fact, I think she even hit him on the head with a hammer or something. And so, I know all about Jim Morrison. And, as a matter of fact, Herb Cohen tried to manage him at one time. And they were playing around LA when we first started. They were working at the Whisky a Go-Go and all that stuff. And so I am pretty well-acquainted with the rise of Jim Morrison. And the thing that was obnoxious about Jim Morrison was when Crawdaddy decided to proclaim him the Lizard King of rock and roll and went on this bizarre rampage. And the type of merchandising that was originally associated with Doors music I thought was really distasteful and stretching the boundaries of what it actually was beyond the realm of credibility.

Okay. So what you are making fun of is the deification of Jim Morrison.
No, I'm not even picking on Jim Morrison. I am talking about the machinery that takes anything and exaggerates it to the point where it's blown out of proportion and the public believes the inflated version of what the reality is. I am a realistic kind of a guy. I just try and look at things the way they are, take them for what they are, deal with them the way they are, and go on to the next case. But, Americans thrive on hype and bloated images and bloated everything, and anything that's realistic they turn away from. They want the candy gloss version of whatever it is. And Jim Morrison is only one example of that."'' (FZ in Frank Zappa, 82/03)

References to Jim Morrison and The Doors