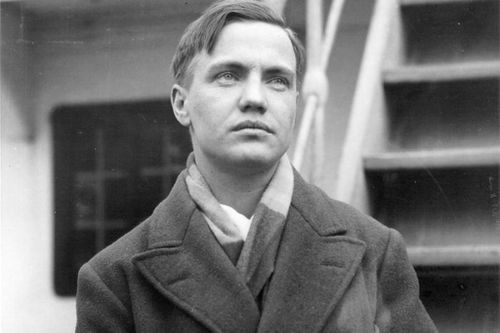 George Antheil (July 8, 1900 – February 12, 1959) was an American avant-garde composer, pianist, author and inventor. A self-described "Bad Boy of Music", his modernist compositions amazed and appalled listeners in Europe and the US during the 1920s with its cacophonous celebration of mechanical devices. His most famous piece of work is "Ballet Mécanique" (1925).

"There's another album by him, on a Dutch label. I have it. There are a group of pieces for piano and violin. It has "Ballet Mecanique" on one side, and it has these obscure pieces – the thing that's odd about these pieces is the rhythm. I put the needle in the groove and started listening, and I went, "Son-of-a-bitch. I could have written that." It really sounded like "The Black Page." There were a couple of people who were vying for the title of "Bad Boy of Music" during that period. The other guy was Leo Ornstein, who was a composer who wrote piano music, some of which was to be played with a two-by-four. One of his pieces was called "Wild Men's Dance." You couldn't play the chords with your fingers, you needed a 2-by-4. You can imagine a guy in a tuxedo in Carnegie Hall going DUN DUN DUN DUN DUN – "This is 'Wild Men's Dance'! I'm the Bad Boy of Music! DUN DUN!" (FZ in The Mother Of All Interviews (Part 2))

Your music has always been filled with some of the most complex rhythms imaginable. Who were your influences there?


You mean the polyrhythms and all that kind of stuff? Well, I really don't know what to say about that kind of rhythm. Most people don't use it, they don't take to it very naturally; but there have been other composers who worked in that field. It came as a big shock to me when somebody sent me an album by a Dutch group that had Ballet Mécanique by George Antheil on one side, and the other side had pieces for violin and piano, and I swore I could have written them because of the rhythms. It was exactly the same kind of stuff that I would have done. And I'd never heard these pieces before – they'd been laying in somebody's closet, and they'd found the charts and performed them. (FZ in Zappa 89-7)