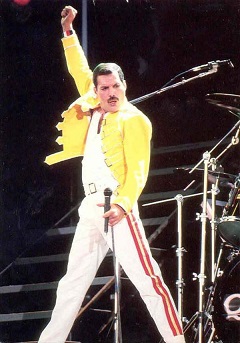 "At Kensington Market we'd get marijuana mixed with jasmine tea, and then take it in turns to separate the grass from the tea. One day Tupp took it home and hadn't got time to separate it. Now in those days Freddie wouldn't go near dope, but he didn't know that it was still all mixed up and made himself what he thought was a pot of jasmine tea. When we got home he was smashed out of his head! He had a Frank Zappa album We're Only In It For The Money, and on one track there's a noise like a stylus scraping across a record - but it's meant to sound like that; Well, Freddie was busy wheeling around the room, arms flapping, and he'd put on his Zappa LP. When it came to this bit he thought somebody had scratched his precious album and went flying across to the turntable, throwing himself on the LP to check it. He was clean out of his box that day!"

— Geoff Higgins, Queen and I: The Brian May Story by Laura Jackson, Smith Gryphon Publishers, 1994, page 33.