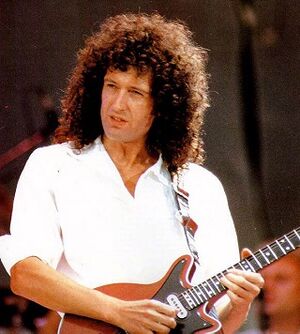 Brian May is an English rock guitarist and astrophysicist[1], best known as a member of Queen.

Zappa claimed in the One Size Fits All Interview that May was one of the guitarists he admired: "There are a few that I've heard recently who I think are real good. I like Brian May of Queen – I think he's really excellent."

Brian May was interviewed for the documentary Ein Leben Als Extravaganza - Das Genie Frank Zappa. He once made the following statement about Zappa:

"I was fortunate enough to meet Frank Zappa, a truly great rock musician, and a very unorthodox and innovative creator. He was already very ill when I met him (I was working with his son in L.A.) I told him I admired his skill and courage in improvising so much in his music, live in front of large audiences. He said, 'Courage? - What do you mean?!' I said that I was always very aware of the possibilities of making mistakes. He replied, 'How can you make a mistake? It is your solo, your guitar, and you are playing a piece of your own music. Who could possibly tell you you are making a mistake?!!'"