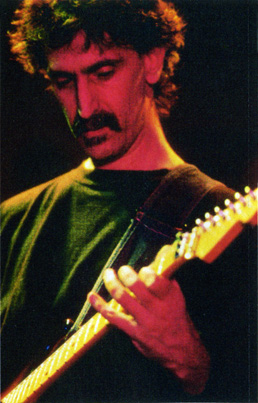 Guitar World, May 1988
by Noё Goldwasser


Only in it for the funny
Frank plays again!

Francis Coppola's old stomping ground, Zoetrope Studios, is down Las Palmas from The Strip in a non-descript part of Hollywood. Through the stage door and into a cavernous soundstage — blink blink — darkness ... eyes focus ... ah! Hey, this is Frank Zappa rehearsing his latest band of village idiot savants. The scaffolding's up, the lighting's getting cued, a tech is at the board mixing the sound that's coming out of a crack ensemble of musicians and it looks like Frank is getting ready to stack the whole thing up and take it on the road.


But what's this? Does Frank actually have some sort of weird Strat-shaped object strapped to his torso, and is he indeed flailing it with reckless abandon as he draws forth succorous notes from its electric innards? You betcha. The spotlight's on Zappa as he effortlessly lofts a vital section of guitar raga-rock from Chunga's Revenge, letting it bounce around the room and into the rafters, getting lost somewhere in the Zomby Woof.


He assumes the conductor's chair, putting his band through the paces of a new number, "Jesus Thinks You're A Jerk." There's a healthy complement of Zappa regulars in this crew. Ike Willis and Bobby Martin are on vocals, guitars and keyboards; Scott Thunes running all over the place on bass; Chad Wackerman (this time we spelled it right, Chad) pounding the kit; the brothers Fowler on brass; and a number of other cohorts who make up Zappa's largest touring outfit of recent years. It becomes evident by the tune's end that the religious right will not fare well at the hands of Zappa's acid wit.


Neither will male prostitutes in Los Angeles, I am told, nor Jim and Tammy or "Baritone Women," for that matter, but who's counting? Certainly not Frank Zappa, who's looking at this mini-tour as a mini-triumph of a man who knows he's right. When the traveling circus hits New York's Beacon theater, the three consecutive shows will have three distinctly different programs, allowing Frank to stretch out on the vast breadth of his chestnut-studded repertoire and add reams of invective to his rapidly growing catalog of socially-motivated salvos.


Hey, Frank, were you surprised when the shows sold out in three hours in New York?


"I wasn't, the promoters were. I offered 'em five days in some big cities, and they'd only come up with three. So we scheduled on through the rest of the tour and they had second thoughts when they saw how fast we were selling out, but it was too late." An 18-city schedule would take Zappa's ensemble from Albany to St. Louis in the space of a month-and-a-half, and the show would then be on the proverbial road. (At press time, another show was added at the tail end of this cycle, allowing New York-area players and cult members to see Zappa play guitar again at jumbo-sized Nassau Coliseum. Then, on to Europe in the spring, and back thereafter to hit the rest of the US.)


After a break, Frank marshals his crew through the paces of a beautiful updated rendition of "Stairway To Heaven," plays some more bitchin' guitar and generally rehearses another couple hours.


"I've got just this Strat tonight, but I got this Ibanez that Steve Vai gave me and I'm going to slide in a Roland pickup for the Synclavier. The pickup arrives tomorrow and I'm going to set it up then. And there's also two guitars from Kramer which I don't have yet."


We'll leave the intense Mr. Zappa in his fancy rehearsal hall as he ponders his equipment, his band and his overhead ("You can rent a good-sized parking space in New York for what I pay to rent this space."). Ours is but to enjoy and savor the moment when Frank comes to Our Town playing his guitar. And to hope fervently that he doesn't "Stay a week, and get the crabs and go back home."